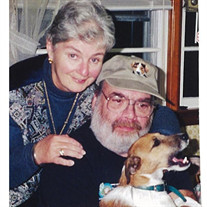 Helen Ann Hammerly Cooke, 74, formerly of Colonial Beach, VA passed peacefully at Heritage Hall in Leesburg, on Friday, March 22, 2019. She was born on June 15, 1944 to the late George P. Hammerly and the late Esther Rhodes Hammerly in Leesburg, VA. Helen was a 1962 graduate of Loudoun County High School and attended Ohio State University in Columbus, OH (1962-1964). In the early 1960s, Helen began her career as a laboratory assistant for Hazelton Laboratories in Vienna, VA. In the 1970s she was employed by Experimental Pathology Laboratories, Inc. in Herndon, VA, where she was most proud of her responsibility as a Toxicology Data and Histopathology Data/Residual Materials Auditor. In 2003, she retired early due to Parkinson disease, after 32 years of outstanding service with EPL, Inc. She enjoyed taking pictures and scrapbooking, crafting and gardening, cooking and entertaining, reading juicy novels, taking care of her cats, and spending as much time as possible with her family and friends. She had a passion for Leesburg/Loudoun County history, and researching family genealogy. She enjoyed her collections of antiques, baskets, collectible pigs and sharks teeth found near her home in Colonial Beach. Her enthusiasm for celebrations of Christmas, 4th of July, and Halloween, decorating, dressing up, and creating special times for all, was unmatched. Her dry humor earned her the nickname “Cookie” by the caring staff at Morningside House and Heritage Hall. Helen was predeceased by her husband John Wilson Cooke, Jr. in 2000, and their son John W. “Jack” Cooke, III, in 1967. She leaves 2 children and 5 grandchildren to cherish her memory: her son, Jeff Cooke and daughter in law Vicky, of King George, VA; her daughter Cristal Smith of Ashburn, VA; her granddaughters, Makenzie Smith, Katie Cooke, Hannah Smith, Annie Cooke, and Samantha Smith. She is survived by her two sisters: Sandie Hammerly of Superior, CO; and Betsy Creamer & her husband, John, of Leesburg, VA and their children, David & Ray. Their brother, Buddy Hammerly, predeceased her in 1968. She is also survived by her brother-in-law, Tommy Cooke & his wife, Liz, of Bluemont, VA, and their 2 children, John & Jennifer. A memorial visitation will be held on Tuesday, March 26th, 2019 from 5 to 7 PM at the Loudoun Funeral Chapel, 158 Catoctin Circle, S.E. Leesburg, VA 20175. A Memorial Service to celebrate Helen's life will be held on Wednesday, March 27th, 2019, 1 PM, also at the funeral home. Burial will be private. In lieu of flowers, memorial donations may be made to the Parkinson’s Foundation, 200 SE 1st ST, STE 800, Miami, FL 33131 or to Heritage Hall, 122 Morven Park Rd, Leesburg, VA 20176. Please share condolences with the family at www.LoudounFuneralChapel.com

The family of Helen Ann Hammerly Cooke created this Life Tributes page to make it easy to share your memories.

Send flowers to the Cooke family.