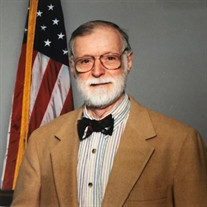 The Honorable Joseph Robert Nacy, 94, of Washington D.C. and Leesburg, Virginia died Sunday March 8, 2020 at Heritage Hall in Leesburg after suffering a stroke. Joseph Robert was born June 17, 1925 in Jefferson City, Missouri. He was the elder of two sons born to Joseph Peter Nacy and Thelma Beryl (Tapp) Nacy. Joe, or “Judge” as many fondly called him, loved to tell stories and jokes and was a wealth of information on history, classical music, the Civil War, and WWII. He was a proud Army Veteran, devoted Catholic, and loving family man. In his prime he loved to run and compete in races. He graduated high school in June of 1943 and signed up to serve his country in World War II in September of 1943. He served in the 2nd Platoon Company C, 1268th Engineer Combat Battalion in France and Germany in the European Theater of Operations, and Luzon, Philippine Islands, in the Pacific. He was honorably discharged as a Sergeant in 1946. In December of 1946 Joe met Mary Jane Mossinghoff who would later become his loving wife on January 3, 1953. Joe graduated from Saint Louis University School of Law (J.D.) in June 1951 and was admitted to the Missouri Bar in September 1951. He practiced transportation law in Jefferson City Missouri from 1951 to 1970 when he relocated his wife and family to Washington, D.C. to serve as an Administrative Law Judge at the Interstate Commerce Commission. In December 1980 he transferred to the Federal Energy Regulatory Commission where he served as a Judge for 32 years. Judge Nacy retired on November 30, 2013 bringing his total Federal service to 46 years. He lived in D.C. until retirement when he moved to Leesburg, Virginia to be closer to his family. Joe spent his final years keeping the wonderful staff at Heritage Hall in Leesburg entertained with his stories, as well as his son Matthew, and daughter-in-law Kari who assisted in his care. He was one of kind and will be greatly missed by all who knew and loved him. He leaves behind his loving children, daughter Mary Nacy Pi and husband Fransesc Pi, his son Matthew J. Nacy and wife Kari, and son Christopher J. Nacy. Joe was the very proud grandfather of 5 grandchildren, Stephen Nacy, Suzanne Nacy, Megan Saunders, Marcel Pi, and Savannah Nacy; and 4 great grandchildren, Lily Nacy, Ashton Saunders, Sebastian Saunders, and Esmond Saunders. He was preceded in death by his devoted wife of 63 years Mary Jane Nacy, his brother James Oliver Nacy, and countless other loved ones from the Nacy and Mossinghoff families. Memorial service and interment will be held at a later date in Arlington National Cemetery. In lieu of flowers, memorial contributions in the name of Honorable Joseph R. Nacy may be sent to Friends of the National World War II Memorial, https://www.wwiimemorialfriends.org/

The Honorable Joseph Robert Nacy, 94, of Washington D.C. and Leesburg, Virginia died Sunday March 8, 2020 at Heritage Hall in Leesburg after suffering a stroke. Joseph Robert was born June 17, 1925 in Jefferson City, Missouri. He was the elder... View Obituary & Service Information

The family of Honorable Joseph Robert Nacy created this Life Tributes page to make it easy to share your memories.

The Honorable Joseph Robert Nacy, 94, of Washington D.C. and...

Send flowers to the Nacy family.