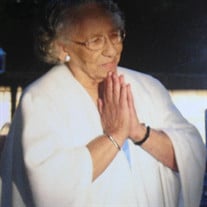 Hyacinth Aletha Campbell-Burrowes Hyacinth Althea Campbell-Burrowes of Reston, Virginia transitioned peacefully on August 9, 2019, just 19 days short of her 101st birthday, and after an extended period of declining health. Hyacinth, the third of five children, was born on 28 August 1918 in Jackson, in the parish of Saint Mary, Jamaica, to Aubrey James Campbell and Rosabell Agatha Day. She married Cecil Augustus Burrowes on 19 December 1943. Lured by the promise of land and a better life for their family, Cecil and Hyacinth made the life changing decision to immigrate from Jamaica to Liberia, West Africa. Cecil left for Liberia on 18 September 1948. Hyacinth, accompanied by their two young children, followed later. Hyacinth’s journey to Liberia was wrought with challenges including a lengthy strike that left Hyacinth and the children stranded at a port in the USA. With the help of virtual strangers, who seemed to appear as if by divine intervention, when she needed them most, and by using some resourceful thinking and decisive action, Hyacinth weathered the unexpected delay, and then - on 5 December 1950 - managed to gain passage on one of the first ships to set sail for Liberia, once the strike had ended. During this period, she discovered a strength, resilience and determination she had not dreamed she possessed. Having begun her journey afraid, alone and not quite sure she could manage on her own, she arrived in Liberia confident that she could and would build a new life there for her family. In Liberia, while caring for her growing family, she worked alongside her husband to overcome many obstacles and make their vision of entrepreneurial enterprise a reality, establishing the country’s first coffee processing company in 1952. The quiet strength, resilience, determination and resourcefulness she had been surprised to discover during her sojourn in New York, would serve her well in forging that new life in Liberia. Hyacinth was a nurturing and loving wife and mother. Giving and kind, she fostered children in far off lands until her decline, always striving to share whatever blessings she believed she was fortunate enough to receive. Hyacinth was gentle and humble, but with a deep abiding strength and faith that sustained her through the many challenges of life as a pioneer in Liberia, a place far flung from the only home she had ever known. Sometimes by the grace of sheer will alone, she managed to create and sustain a life of which she could be proud. In 1980, during a period of great political unrest culminating in a military coup, Hyacinth came to the realization that the safest and best course of action for her family would be to escape Liberia, leaving behind for the second time in her life, everything that had become familiar, and the place and people she had grown to love. Leaving everything she had worked so hard to create, Hyacinth immigrated to the United States, settling in Virginia, where she once again successfully reinvented her life and created a home. After over 30 years in Liberia, the family she had left behind in Jamaica and with whom she had maintained a tenuous long-distance bond, were once again relatively near and she immediately set out to re-establish improved contact. Despite the distance, she held tight to the connections she left behind, bringing them forward with her until the circle was once again complete. Hyacinth’s life work is best exemplified by the people she loved. She poured her heart and soul into giving pieces of herself to everyone she held dear. She is survived by her children: Earl Burrowes, Sr, C. Patrick Burrowes, Beverly Burrowes-Barnes, Norma Burrowes-Gibson, Raye Burrowes-Makor and John Alva Burrowes Sr. Grandchildren: Cecil Burrowes, Earl Burrowes, Jr, Kenny Burrowes, Stephen Dunbar III, Siatta Dunbar, Kassahoun Burrowes, Hyacinth Burrowes, Kadallah Burrowes, Roxsanne Barnes-McCulloch, Jacalyn Barnes, Bina Barnes, Diana Konate, Monica Konate, Kevin Konate, Tony Konate, Manfred Makor, Korsha Makor, Caroline Burrowes, Nuwoe Burrowes-Kerkula, Quincy Burrowes. Great-Grandchildren: Danielle Dunbar, Serena Dunbar, Gordon Dunbar, Tania Burrowes, Emiah Burrowes, Juliette Burrowes, Sarit Dunbar-Siegel, Avital Noa Dunbar-Siegel, Marek Makor, Lukasz Makor, Katriel Makor, Quandra Burrowes, David Q. Burrowes, She is predeceased by her husband Cecil Augustus Burrowes, her daughter Sonia Burrowes-Dunbar-Dick, and grandchildren Alva Burrowes Jr., and Quincy Burrowes.

The family of Hyacinth Aletha Burrowes created this Life Tributes page to make it easy to share your memories.

Send flowers to the Burrowes family.