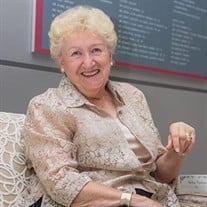 Ingrid Sophie Summa, 79 of Leesburg, Virginia passed on Thursday, January 30, 2020. Ingrid was born Tuesday, August 6, 1940, in Bielefeld, Germany. She then immigrated to Ottawa, Ontario, Canada in 1953, where she lived until 1963. As an adult, Ingrid worked for the Department of Defense for the Canadian Government and in 1963 she transferred to the Canadian Embassy located in Washington, DC. In 1964 she met her future husband, H.P. Summa. Married in 1966, they lived in Washington, DC and Bethesda MD until April of 1972. At that time, Ingrid, HP and son Stephen moved to Leesburg, VA. Ingrid embraced her life in Leesburg, working as a Kindergarten assistant at Loudoun Country Day School and Catoctin Elementary. Ingrid and her husband started two businesses in Leesburg, Leesburg Emporium and Pete’s Smoke Shop. She retired from the foreign government, where she worked as an Office Manager of Public Affairs with the Canadian Embassy. Ingrid became a United States Citizen on August 8, 2008. She enjoyed her retirement, traveling and driving a school bus for Loudoun County Public Schools. In her fully retired years, you would, more than likely, find her with her best friend, Cindy Mellot (loving dubbed Thelma and Louise). Ingrid enjoyed a good glass of wine, a game of bridge and spending with her family and friends. She resided in Leesburg surrounded by her friends and family until she was called home. She was a member of Saint John the Apostle Catholic Church. She leaves her family to cherish her memory including her son and partner, Stephen & Kathie of Leesburg, VA; 7 granddaughters: Brittany, Carrington, Kara, Savannah, Corina, Maya and Alaina; and 3 great-grand-children, Brianna, Grayson and Kinsley. She was predeceased by her husband and love of her life Herman P. Summa in 2002. A Mass celebrating Ingrid’s life will be held at on Friday, February 7th at 1:30 pm at St. John the Apostle Catholic Church (small white church) located at 7 Union Street, Leesburg, VA 20176. Interment will follow in Leesburg Union Cemetery, Leesburg, VA, with a gathering of Family and Friends to follow at a private residence. The family will receive friends from 7:00 PM to 9:00 PM on Thursday, February 6, 2020, at Loudoun Funeral Chapel, 158 Catoctin Circle, SE, Leesburg, Virginia 20175. Online condolences may be made to the family at www.loudounfuneralchapel.com

Ingrid Sophie Summa, 79 of Leesburg, Virginia passed on Thursday, January 30, 2020. Ingrid was born Tuesday, August 6, 1940, in Bielefeld, Germany. She then immigrated to Ottawa, Ontario, Canada in 1953, where she lived until 1963. As an adult,... View Obituary & Service Information

The family of Ingrid S. Summa created this Life Tributes page to make it easy to share your memories.

Send flowers to the Summa family.