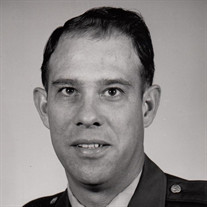 Colonel Jack Eugene Baker (Ret.) Jack Eugene Baker, Colonel USA (Ret.), age 89, passed away peacefully of natural causes at his home in Ashburn, VA on July 16, 2020. He was preceded in death by his devoted wife, Catherine Elaine (Nelson) Baker just seven months prior. They were high school sweethearts and married for 68 wonderful years. He is survived by his three children, Grenda Tienvieri, Tanya Beech (Len), Brad Baker (Janice) and five grandchildren, Valerie (Tim), Dale (Nicole), Jennifer, Dayna and Meredith and two great-grandchildren, Austin and Nash. Born July 26, 1930 in Marceline, MO to Juanita and Francis Eugene Baker, he was raised by his mother and grandparents, Samuel Boyd and Feilda Pearl (Hamilton) Prunty. At the age of 14, he received what would be the first of many distinguished awards and medals, the Eagle Scout Award. He attended Wentworth Military Academy; University of Missouri graduating with a Bachelor of Science in Civil Engineering; and George Washington University receiving his Master of Science in International Affairs. Jack served in the U.S. Army for 30 years, primarily in Air Defense. He and Elaine moved 31 times together residing throughout the U.S. and abroad. Their favorite military assignment was Rome, Italy where Jack served as the Military Attaché. He was later assigned as the Inspector General for the U.S. Army Intelligence Command. His military awards and decorations include the Legion of Merit Award, two Bronze Star medals, Meritorious Service Medals with two Oak Leaf Clusters, The Air Medal, The Army Commendation Medal, and the Combat Infantry Badge. Jack’s photography hobby began in high school and continued throughout his life. He especially loved photographing people, developing and printing his photographs. He was also a big country music fan and often wore his western belt and boots. Jack and Elaine were thrilled to share their joy of camping, boating, fishing and cooking with family and friends. When they moved to the River Ridge community in Woodbridge, he served on the community board for 13 years; was an active member of St. Paul Methodist Church; and was always willing to lend a helping hand to his friends and neighbors. He never missed an opportunity to make you laugh by delivering one-liners, witty phrases or telling a story. He had a generous heart and lived a happy life of faith, service and love. A service will be announced at a later date whereby Jack and his wife, Elaine, will be interred at Arlington National Cemetery. In lieu of flowers, memorial contributions may be made to the Wounded Warrior Project (WWP), the Disabled American Veterans (DAV) organization or the Douglas County Special Olympics of Lawrence, KS.

The family of Jack Eugene Baker created this Life Tributes page to make it easy to share your memories.

Send flowers to the Baker family.