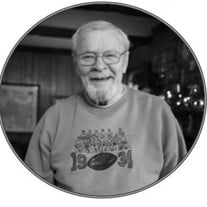 James (Jim) Fox passed away on Sunday, February 13, 2022, in Herndon, Virginia. Jim was born in Perry, Iowa, December 15, 1934. His parents were John and Olive Fox. Growing up in Iowa, he, and his best, and life-long, friend loved fishing and swimming in the Racoon River and pheasant hunting. He had a paper route, detasseled corn, and helped his parents at Fox Lunch in downtown Perry He participated in football and basketball in junior high and high school. He always said, “Perry was the greatest place to grow up.” Perry was a thriving town and at a young age he was hired by the Milwaukee Railroad. He loved to tell his great-grandchildren that he worked on steam engines and how fast they could go. Jim took time to spend four years in the US Air Force. During the Korean War, he was sent to the Philippines for 18 months. After the Air Force he returned to Perry and the railroad. He became a brakeman and later a conductor on the Milwaukee and the Union Pacific City of Los Angeles passenger trains. After the railroad departed Perry for good, he became involved in insurance and stocks and securities and real estate. He continued in real estate in Colorado and then in Virginia until his retirement. Jim was preceded in death by his parents, John and Olive Fox, two sisters, Eveyln Fox and Bonnie (Fox) Johnson and a brother, Edward Fox. His family brought him great joy. He is survived by his wife, Betty, and their two daughters, Caprice Fox of Durango, Colorado, and Tracy Meyer of Herndon, Virginia. His grandchildren are Allison (Kristopher) Kuykendall, of Herndon, Virginia; Ryan (Jamie) Meyer, of Round Hill, Virginia; Marcus (Christin) Meyer, of Leesburg, Virginia; and Jaime (James) Bridger, of Jacksonville, North Carolina; also, sixteen great-grandchildren: Lillian, Emelia, Fiona and Juniper Kuykendall; Elijah, Oliver and Caleb Meyer; Lincoln, Charleigh, Pippin and Radley Meyer; and Christian, Peyton, Addison, Remington and Cashton Bridger.

James (Jim) Fox passed away on Sunday, February 13, 2022, in Herndon, Virginia. Jim was born in Perry, Iowa, December 15, 1934. His parents were John and Olive Fox. Growing up in Iowa, he, and his best, and life-long, friend loved fishing... View Obituary & Service Information

The family of James Lyman Fox created this Life Tributes page to make it easy to share your memories.

Send flowers to the Fox family.