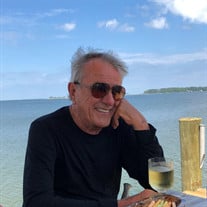 Jan Wijnand September 25, 1940 – November 19, 2018 Jan, age 78, of White Stone, VA passed away after his battle with lung cancer on November 19, 2018. He was the son of the late Jan Wijnand, Sr. and Pieternella Zwaan Wijnand. Jan was born in Dordrecht, The Netherlands. He studied Tropical and Sub Tropical Agriculture at the State College in Deventer, The Netherlands. Upon completing his studies in 1961, he moved to Papua New Guinea where he managed several agricultural plantations. He continued his agriculture work in Indonesia and Australia. He and his family moved to the United States in 1976 where he worked for the World Bank in Washington, D.C. serving in multiple senior management positions covering Eastern and South Africa and Asia until his retirement in 1995. Upon his retirement, he and his wife Ursula Alebrand lived in Hobe Sound, FL, Ashburn, VA and most recently in White Stone, VA where they enjoy the peace and serenity of the Chesapeake Bay and all it’s beauty. Jan enjoyed spending time with his family, boating, fishing and crabbing from his dock and rooting for the Redskins. Jan is survived by his wife, Ursula Alebrand, his daughters Nicole (Richard) Kirk, Pietanella (Gregory) West, Carin (Brent) Robertson and his late son Jon (Sharon) Wijnand, his 7 grandsons Sam and Alex Kirk, Jack and Max West, Liam and Aden Robertson and Jon Wijnand, his brothers David (Jeannette) Wijnand, Hubert (Coby) Wijnand, sisters Carin (Rutger) Scherpenhuijsen and Lotty (Gerard) van Straaten and many nieces and nephews. A celebration of his life will be held at the Loudoun Funeral Chapel 158 Catoctin Circle, SE, Leesburg, VA on Saturday, November 24th starting with a visitation at 2:30pm immediately followed by service at 3:00pm. Please share online condolences with the family a www.loudounfuneralchapel.com

The family of Jan Wijnand created this Life Tributes page to make it easy to share your memories.

Send flowers to the Wijnand family.