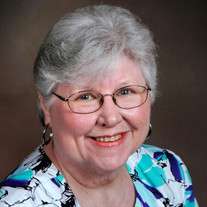 Mrs. Jane Woodruff Wallace, 74 of Ashburn, Virginia passed on Thursday, August 9, 2018, at Spotsylvania Regional Medical Center. Jane was born on the 10th of November, 1943 in Washington, DC. A daughter of the late John McLeod Woodruff and Martha Johnson Woodruff. Wife of the late William D. Wallace, and sister of the late Barbara Smith. (background info) Jane graduated from Loudoun County High School in 1961 and followed up with taking real estate courses at Duquesne University, Pittsburgh, PA in the 1970s. Jane and her family moved back to Northern Virginia in the 1980s and she eventually worked as the Executive Administrative Assistant for the President and CEO of Presearch Incorporated for 16 years. SAIC eventually bought Presearch and Jane continued working there until retirement in 2007. A caring soul, Jane personally cared for her father and later for her husband toward the ends of their lives when they were diagnosed with Alzheimer’s and Parkinson’s Disease respectively. Jane loved animals and adopted rescues throughout her life, providing a healthy and happy home. Jane was a member of Leesburg Presbyterian Church since 1955. She served as a Deacon (chairing Worship Committee) and was ordained as an Elder. Jane leaves her family to cherish her memory including her sons, Dale A. (Suzanne) Wallace of Mineral, VA and Ian S. (Karen) Wallace of Montgomery NY; 3 grandchildren, John, Andrew and Brianna. Graveside services will begin at 10:30 am on Saturday, August 18, 2018 at Union Cemetery, 823 North King Street, Leesburg, Virginia. A memorial service to celebrate Jane’s life will immediately follow at 11:00 AM on Saturday at Leesburg Presbyterian Church located at 207 W Market St Leesburg, Virginia 20175 with the Pastor Deborah Parsons officiating. In lieu of flowers, memorial donations may be sent to Humane Society of Loudoun County P.O. Box 777 Leesburg, VA 20178. https://humaneloudoun.org Online condolences may be made to the family at www.loudounfuneralchapel.com

Mrs. Jane Woodruff Wallace, 74 of Ashburn, Virginia passed on Thursday, August 9, 2018, at Spotsylvania Regional Medical Center. Jane was born on the 10th of November, 1943 in Washington, DC. A daughter of the late John McLeod Woodruff and... View Obituary & Service Information

The family of Jane Woodruff Wallace created this Life Tributes page to make it easy to share your memories.

Send flowers to the Wallace family.