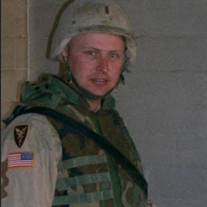 Jason Dale Rovey, 47 of Aldie, Virginia passed on Friday, August 27, 2021, in Aldie, Virginia. Born Wednesday, October 24, 1973, he was the son of Ruth Rovey Jett and the late Jasper Henry Rovey. He was the husband of Rikhonda Rovey. Jason had a seven year career in the Airforce which included time station at Sembach AB Germany, Kunsan AB Korea, and Eglin AFB FL. He later received his commission as an Army 2nd lieutenant after completing the Palmetto Military Academy in 2002. He completed his service in the Army at the rank of captain. His military career included a tour to Germany and his last tour in Iraq where he was awarded the bronze star for his leadership and valor. Jason also received a Bachelor of Arts in Computer Science from the University of South Carolina in 2003. He worked as a federal account manager for many years after his military service before becoming a Strategic Alliances Director for Xerox. Jason is survived by his loving wife, Rikhonda Rovey, daughter, Jaela Ann Rovey, son, Jayden Dale Rovey, brothers, Wayne Rovey (Shawnna) and Shannon Rovey (Jessica). The family will receive friends from 12:00 PM to 1:00PM on Saturday, September 4, 2021, at Loudoun Funeral Chapel, 158 Catoctin Circle, SE, Leesburg, Virginia. The Funeral service will be 1:00PM at Loudoun Funeral Chapel with the Chaplain Patty Cornwall officiating. The family will also receive friends at Plummer Funeral Home, 404 East Union Avenue, Litchfield, IL 62056. A visitation will be held on Wednesday September 8, from 4:00PM to 7:00PM. The funeral will be on Thursday September 9, 2021, at 11:00am. Interment will be immediately following at the Rovey Cemetery. Flowers are requested to be sent to the services in Illinois. Online condolences may be to the family at www.loudounfuneralchapel.com.

Jason Dale Rovey, 47 of Aldie, Virginia passed on Friday, August 27, 2021, in Aldie, Virginia. Born Wednesday, October 24, 1973, he was the son of Ruth Rovey Jett and the late Jasper Henry Rovey. He was the husband of Rikhonda Rovey. Jason had... View Obituary & Service Information

The family of Jason Dale Rovey created this Life Tributes page to make it easy to share your memories.

Send flowers to the Rovey family.