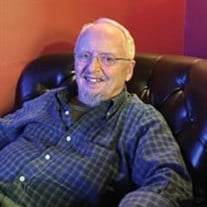 John Willis Churchill II, 75, of Waterford, VA, died peacefully on Friday, January 7, 2022, in INOVA Loudoun Hospital due to complications from pneumonia. Born on May 15, 1946, in Binghamton, NY, “Johnny” was the son of the late John Willis Churchill and Cecile (Marquis) Malone. John graduated from high school (1964) in Connecticut and shortly thereafter enlisted in the United States Air Force where he served for eight years before being honorably discharged (rank of SSgt) in 1974. In 1975, John started his 25-year government career and after retiring, began a second career as a federal contractor specializing in IT/Telecommunications. He was still employed when he passed. While employed, John continued to pursue his education. He earned an AA Computer Science Degree from the University of MD; BS in Business Administration from the University of MD; MS in Telecommunications & Computers from George Washington University; and an MS in Human Development from Vanderbilt University. In his free time, John enjoyed spending time with his family, music, sports, Starbucks, good cigars and hitting the firing range. John also had a love of animals, particularly the dogs he had through the years (Annie, Winnie, Diesel, Ethyl, Heidi and Floyd), and even volunteered at the SPCA. His family and friends knew him for his sense of humor (enjoying a good prank), giving nature and big heart. Left to cherish John’s memories are his wife, Cheryl; two stepsons, Eric and Jeffrey Stangarone; children from his first wife, Janice Swokla: son, Spencer (Tracy); daughters, Jennifer Wenger (James), Jacquelyn Furton (Gary) and Sarah Churchill; grandchildren, Makenna, Molly, Trevor, Nathan and Delaney; and half-brother Garry Malone (Linda). He was preceded in death by his stepfather, Larry Malone and half-brother Doug Malone (Diane). There will be a private ceremony at Loudoun Funeral Chapel and Crematory in Leesburg, VA, on January 20, 2022. John will be laid to rest privately at Arlington National Cemetery, date to be determined. A celebration of life will be held at a later date. In lieu of flowers, contributions may be made to the American Heart Association (heart.org) or Wounded Warrior Project (woundedwarriorproject.org). Share condolences with the family www.LoudounFuneralChapel.com

The family of John Willis Churchill II created this Life Tributes page to make it easy to share your memories.

Send flowers to the Churchill family.