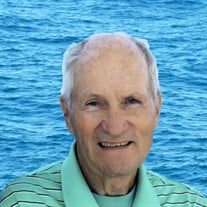 Dr. John Francis Ferrell, DVM passed away peacefully June 9, 2019 in the presence of family. The son of Dr. John Joseph Ferrell, DVM and Margaret R. Ferrell, he was born June 24, 1934 in Newark, NY. Following in his father’s footsteps, Jack graduated from NY State College of Veterinary Medicine, Cornell University in 1958. After a post graduate internship at Cornell, Jack entered the Army in 1960. Passing his boards in veterinary pathology, Jack became a diplomat in the American College of Veterinary Pathologists in 1963. He served the Army in infections disease research, nutritional pathology and trained others in veterinary pathology. Leaving active duty in 1969, Jack became a Chief Pathologist for Hazelton Laboratories in Vienna, VA from 1969 to 1971. He was personally involved in the evaluation of pathologic alterations of lab animals involved in studies. Together with colleague, Dr. William Busey, Experimental Pathology Laboratories was founded in 1971 in Herndon, VA. It grew from a two-person pathology practice to one of the leading independent pathology companies in the world. Through the years EPL INC has had other sites of operation in several US states and Europe. EPL provides pathology support to most major international pharmaceutical, biotech, agrochemical, and consumer product companies. In addition, EPL provides pathology services to EPA, FDA, NTP, and NIH. In 1978, nearly a year before the preservation of research materials mandated by law by the FDA, Dr. Ferrell and Dr. Busey co-founded EPL Pathology Archives, INC. it is recognized as an industry leader in providing trusted managed bioreposity services. It is considered the first repository as a result of the FDA’s good laboratory practices regulations. Dr. Ferrell’s professional memberships include: American Veterinary Medical Association; International Academy of Pathology; American College of Veterinary Pathologists; Society of Toxicologic Pathologists as past president; Society of Toxicology; American College of Toxicology; and Directors for the Wildlife Center of Virginia on the Board of Director. Jack’s wonderful Humor and with will be missed by all. He led an active life and enjoyed skiing, golf and farming with his sons and especially his second home in La Quinta, VA. Survivors include his beloved wife of 53 years, Janis of Leesburg, VA, two sons, John K Ferrell of Bluemont, VA and Brian E Ferrell (Nicole) of Berryville, VA and Two Granddaughters, Charlotte and Emily. He also leaves his sister, Kathryn Shea of Newark, NY and many nieces and nephews. A celebration of Jack’s will be held Friday, August 16 at 2PM at Loudoun Funeral Chapel, 158 Catoctin Cir. SE, Leesburg, VA. A reception to follow. His ashes will be placed at Arlington National Cemetery at a later date (Private). In Lieu of Flowers, Contributions may be made in his name to St. Jude’s Hospital Research, P.O. Box 1000, Dept 142 Memphis, TN 38148 or to the charity of your choice.

The family of Dr. John F. Ferrell created this Life Tributes page to make it easy to share your memories.

Send flowers to the Ferrell family.