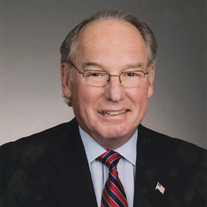 Col. John Edward Gould, Sr. passed August 2, 2019 at his home in Leesburg, VA surrounded by family. Ed was born on August, 6, 1941 in Charlotte, NC. His family moved to Wilson, NC where he attended high school and met his wife, Christine Barnes.He graduated from the Citadel and received a master's degree in education from George Washington University. He retired from the Air Force after 26 years of service. After retiring, he enjoyed a second career in the private sector. Ed was an avid golfer playing over 700 different golf courses to include several foreign countries as well as across the United States. He found great joy in helping others develop their golf games. He was a loving husband and father he is survived by his wife of 55 years, Chris, daughters, Susan Cutler, Lynn Crutchfield, her spouse, Elliott and son, John Gould Jr., Five grandchildren: Edward Cutler, Eddie, Liza, Grace and Lucy Crutchfield. Services will be held at Loudoun Funeral Chapel, 158 Catoctin Cir. SE, Leesburg, VA 20175. Visitation will be Tuesday August 6, 2019 from 6 to 8pm and Funeral Service Wednesday August 7, 2019 at 11AM. A reception will take place immediately following the service at River Creek Club. In lieu of flowers, please donate to the charity of your choice in honor of Ed.

The family of Col. John "Ed" Gould Sr. created this Life Tributes page to make it easy to share your memories.