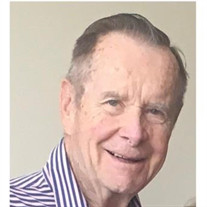 John T. “Jack” Fitzgibbon, 92, of Ashburn, Virginia passed away peacefully on February 4, 2021. Jack was born in the Emerald City of Newark, New Jersey to Ethel M. and John W. Fitzgibbon, a policeman in the City of Newark. Jack had the unique distinction of completing his entire education, including graduate school, all within the boundaries of the City of Newark, including St. Benedict’s Prep to which he would remain a loyal supporter. Jack was an outstanding student in school and fine athlete as part of the Madison Avenue Playground crowd, a group that would be life-long friends. Jack was drafted by the United Stated Army and was sent to Officer’s Candidate School, where he was commissioned a 2nd Lieutenant and served his country during the Korean conflict. Jack was a very patriotic citizen, jokingly stating that it all stemmed from the fact that his mother was born on the 4th of July. Prior to being drafted, a chance meeting set up by friends, Jack met the love of his life, Kathleen “Kathy” Guidera. They were married in 1953 and were together for the next 67 years, the best 67 years of Jack’s life as he would often describe the time spent with Kathy and his family. Jack and Kathy would have 4 adoring children together and the foundation was set with the pillars of Jack’s life being his strong Catholic faith and family. Armed with a degree in Chemical Engineering from Newark College of Engineering (now New Jersey Institute of Technology) and an MBA from Rutgers University (Newark), Jack embarked on a very successful professional career, first with Exxon and then 30+ years with Foster Wheeler Energy Corporation, rising through the ranks to Vice President of Sales. Like everything he did, Jack was competent, diligent, and hard working. Jack and Kathy, after a short period living in the City of Newark, moved to the suburbs of Florham Park to raise their children. The newly married couple found in Florham Park an idyllic setting for families. Jack and Kathy became an integral part of the community, active in church, school, and athletic events. Jack coached Little League baseball and CYO basketball for many years alongside his sons. In 1975, Jack and Kathy started a new phase of their life, with a transfer to Pittsburgh, Pennsylvania with their youngest daughter, Karen, in tow. Once again, Jack and Kathy became very active members of the church community, Wildwood Golf Club, Pittsburgh Athletic Association, and patrons of the Pittsburgh Symphony. Jack became a rabid Pittsburgh Steelers fan and a season ticket holder, witnessing a number of Super Bowl championship seasons. Jack and Kathy made many friends but always the best times were with the family sitting around, with Jack enjoying a fine single malt scotch and good cigar. In 1996 Jack retired from Foster Wheeler Energy Corporation. Post retirement, Jack and Kathy travelled the United States and Europe, including a very memorable trip to commemorate their 50th wedding anniversary to Ireland with the entire family. The pubs received a good workout for the 10-day stay, with Jack leading the group enjoying the land of his ancestors…for Jack, it was always about family. In 2016, Jack and Kathy moved from Pittsburgh to an active senior community in Ashburn, Virginia to be near their youngest daughter, Karen. For all of his 92 years, Jack was always of strong and clear mind, and never swayed from his principles or his priorities. Jack loved the ocean and spent many family vacations at the New Jersey shore. Jack was an avid tennis player, enjoying the game into his late 80’s, remarking that he could still keep up with the young people. Jack kept his mind sharp with the daily crossword puzzle and was a vociferous reader. A true Renaissance man, there were not many topics that Jack could not discuss in an intelligent and engaging manner, usually with a cigar lit and a tumbler of scotch in typical Irish fashion. Jack was the quintessential backbone of the family. Jack lived his life saying little, doing much and receiving every person favorably. His unparalleled integrity and quiet generosity made Jack a role model for life and his family. Jack will be greatly missed because he gave so much. Jack’s well lived life will live on through his beloved wife Kathy (Ashburn, VA), son John W. and his wife Pamela (Newport Beach, CA) and his two daughters, Mary Joan (Carrollton, TX) and Karen A. (Reston, VA) and nieces and nephews. A son, Brian T., predeceased Jack. A Mass of Christian burial will be held on Saturday, February 13th at 1pm at St. Theresa Roman Catholic Church, Ashburn, Virginia. In lieu of flowers, donations in memory of John T. Fitzgibbon may be made to St. Benedict’s Preparatory School, 520 Martin Luther King Drive, Newark, NJ 07102.

John T. &#8220;Jack&#8221; Fitzgibbon, 92, of Ashburn, Virginia passed away peacefully on February 4, 2021. Jack was born in the Emerald City of Newark, New Jersey to Ethel M. and John W. Fitzgibbon, a policeman in the City of Newark. Jack... View Obituary & Service Information

The family of John "Jack" T. Fitzgibbon created this Life Tributes page to make it easy to share your memories.

Send flowers to the Fitzgibbon family.