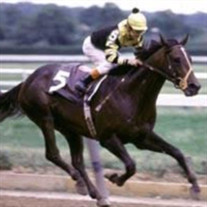 John F Moran, 63, of Virginia, passed away on March 16th, 2020 in Leesburg. John was born in Revere, Massachusetts to the late John F. Moran and Alice M. (Dick) Moran, on March 23, 1956 in the middle of a snowstorm. He was raised and educated in Revere, graduating from Revere High School in 1974. He made his home in Leesburg, Virginia for the past 19 years. He worked as a Computer Technician for a Virginia Hospital where he met his loving wife, Mary Alice. He previously had several jobs including working at Suffolk Downs in East Boston Massachusetts. He loved horses so Suffolk Downs was a perfect fit. In his younger days he played ice hockey in the position of goalie. He was a gifted player. His family will always remember when he made his own goalie mask. The Boston Bruins were and continued to be his favorite team throughout his life. John loved all of his nieces and nephews from both his family and Mary Alice’s family. John was devoted to animals, a quality he shared with his wife. From a young age he would bring home injured and stray animals and care for them. His mother fondly recalls a story involving a hurt seagull. John and Mary took a distressed squirrel into their home and named it Rascal. Rascal became a beloved pet, and the subject of many photos and conversations. When John and Mary were moving to their new home, their main concerns were how two stray cats and all the wild animals they fed would survive. They managed to bring Missy to their new home but always regretted not being able to bring Whitey. John is survived by his wife, Mary Alice, his mother, Alice M Moran of Milford NH, his brother and sister-in-law, Paul and Colleen Moran of Lynn MA, his sister and brother-in-law, Theresa and Paddy McKillop of Milford NH, his nephews Scott P. Crocker, PJ Moran and Derek Moran, his niece Ceilidh B. McKillop, his Aunt Patricia Strum of Pennsylvania, his Aunt Arlene Barnes of Burlington MA; and several cousins. The family of John Moran wishes to extend our sincere thanks to the Geppert family at this difficult time. Arrangements are by Loudon Family Chapel. There are no visiting hours. In lieu of flowers, donations in his memory may be made to the Loudoun County Animal Services 39820 Charles Town Pike Waterford, VA 20197.

John F Moran, 63, of Virginia, passed away on March 16th, 2020 in Leesburg. John was born in Revere, Massachusetts to the late John F. Moran and Alice M. (Dick) Moran, on March 23, 1956 in the middle of a snowstorm. He was raised and educated... View Obituary & Service Information

The family of John F Moran created this Life Tributes page to make it easy to share your memories.

Send flowers to the Moran family.