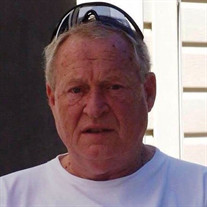 John B. Murphy, Jr., husband of Sue N. Murphy, and father of John III (Bunky), Brian, Beth, Pat and Pam, passed away on Sunday September 8, 2014 at the age of 77. John was born on July 27, 1937 in Baltimore, MD. He was a son of the late John B. Murphy and Mary Catherine Mueller Murphy. He was also predeceased by a daughter Pamela Marie Murphy. After leaving the United States Air Force, Mr. Murphy worked for the Federal Aviation Administration for 33 years as an Air Traffic controller, before retiring in 1987. While living and working in Leesburg, Va., John was the consummate volunteer always willing to lend help where required. He was the broadcaster for LCHS for Friday Night Football for over 25 years. He was a Member of the Jaycees. Possibly his biggest impact on Leesburg, Loudoun, and the State of Virginia was his co-creation of Central Loudoun Little League in 1967. Mr. Murphy served as President, Secretary, Umpire Consultant, and Manager/Coach and as a Board member at various times while affiliated with the League from 1967 – 2011. John’s dedication to the youth of Leesburg, northern Virginia and the Little League community is obvious from his over 40 years of volunteering. He helped Central Loudoun Little League prosper as the community grew and helped plan the development of new field complexes and identifying location where the players could compete currently known as Founders Fields. He spent countless hours behind the scenes traveling throughout Virginia training other volunteers. Creating great learning and training environments that produced many exceptional adults involved today. He also instilled the sense of volunteerism and “giving back” to the community, which is seen in his children, and grandchildren who are participating in Little League and youth sports around the country currently. His successes as an administrator and umpire have left their mark on many that have worked beside and with him. This can been seen in his selection to umpire in several State, Southeastern Region and World Series tournaments. He is an Honored member of the Va. Little League Hall of Fame, Dulles Little League and Central Loudoun Little League Hall of Fame. Along with many of his colleagues, is also an honoree in the Virginia Little League Museum. He leaves his family to cherish his memory including his wife Mary Suzanne Murphy, four children, John III ”Bunky” and his wife Heide of Ashburn, Brian Keith and his wife Dina of Cheasapeake, VA, Mary Elizabeth “Beth” and her husband Doug Curry of St. Augustine, FL, Susan Patricia Murphy “Pat”of Leesburg, VA; his sister, Kathleen Lundquist of CA, 12 grandchildren, Colleen McDonough, Michael (Mickey) McDonough, Trey Curry, Madeline Murphy, Ryan Curry, Donella Rodriquez, Patrick Murphy, Allyson O'Brien, Dominique Rodriguez, Megan Curry, Mary Murphy, Katelyn Murphy, and 5 great grandchildren Acayla Murphy, Alayna Murphy, Ashland Jones, Cilicia Jones, Cameron O'Brien. Friends called on Thursday, September 11, 2014 from 6 to 9 pm at the Loudoun Funeral Chapel, 158 Catoctin Circle, SE, Leesburg, VA. A Funeral Mass was held on Friday, September 12, 2014 at 1:30 pm at St. John the Apostle Catholic Church Oak Crest Manor Drive, Leesburg, VA. Interment followed in Leesburg Union Cemetery, Leesburg, VA. In lieu of flowers, memorial donations may be made to Loudoun Interfaith Relief or to Catholic Charities of Loudoun.

The family of John Boyd Murphy created this Life Tributes page to make it easy to share your memories.

Send flowers to the Murphy family.