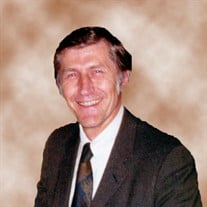 Dr. John Elmer Reinertson, beloved great-grandfather, grandfather, father, brother, uncle and friend, died September 26th, 2018, at the age of 88. John was born in Iola, WI. The eldest of seven; his parents are the late Elmer and Junette Reinertson. A natural athlete, John played both basketball and football in High School and at St. Olaf College, MN. He finished his college studies in 3 years to graduate at the same time as the love of his life, Joan (Joie) Wahl, whom he married in 1951. John's career had them traveling around the World; starting as a Fulbright Scholar to Norway, then as a graduate student to Madison, WI, shortly after as a Naval Officer to Hawaii, and then as a Foreign Service Officer to many countries in Scandinavia. When John retired, he and Joie moved to the cabin they built together on top of Massanutten Mountain. Their last move was to Waterford, VA, where John held his most cherished position, Primary Caretaker to his wife, Joie, who preceded him in death by one month after 67 years of marriage. John is survived by his brother, Mark Reinertson, his sister, Sara Phipps, his 5 children and their spouses, his 11 grandchildren, and two great-grandchildren; all of whom will miss him dearly. His unique and glorious laugh echoed around the World, and still does in the hearts of all who loved him. A joint memorial service to celebrate John and Joie's life will be held at Holy Trinity Lutheran Church, in Leesburg, on October 27th, 2018, at 2 p.m. Please share online condolences with the family on: www.loudounfuneralchapel.com

The family of John Elmer Reinertson created this Life Tributes page to make it easy to share your memories.

Send flowers to the Reinertson family.