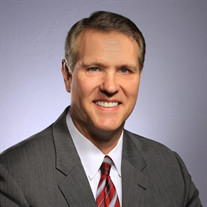 John Emmett Suttle, age 57, of Leesburg, VA, passed away at home during his daily workout on Monday, October 7, 2019. He was born Friday, December 22, 1961 in Port Arthur, Texas to Harold Woodrow Suttle Jr. and the late Patricia (Capps) Suttle. In the days from his birth until his death, John lived the fullest of lives with experiences and accomplishments most of us could only dream of. He was physically commanding and it was impossible for him to go unnoticed wherever he was. He quite literally stood above the crowd. His physical presence was surpassed by his keen intellect and quick wit, making him truly larger than life. He had an amazing ability to make first-time acquaintances feel like lifelong friends. Ever the thoughtful host and orchestrator, John was always at least five steps in front of all of us and fulfilled unanticipated needs and desires with grace and generosity. John was a leader and mentor to more people than anyone will ever know. Those who have worked for John have said he was the best boss they’d ever had, bar none. He encouraged people to accomplish more than they thought they could and had faith they could do whatever the task. He wasn’t afraid to be himself in the workplace; he joked, he laughed and he enjoyed what he did. Most of all, he inspired enthusiasm and dedication. When John was focused on a task, it got his full attention and the effect was captivating. These same qualities extended to his personal life, where John guided and nurtured the development of his four daughters. He had an innate sense of what each needed along the way and he shared his wisdom, insight and perspective so they could become who they are today. A lover of classical literature, he raised them on Greek mythology and Aesop’s fables. His dedication to the written word was imbued in each of his girls and is carried on through his grandchildren. He was immensely proud of each of them. John was the big brother to his younger sister and brother, a role he relished. Family was important to John and he took on the role of historian, tracing the Suttle lineage back through the Civil War and American Revolution to England. He was immensely proud of his family and felt a deep responsibility to share his knowledge with future generations. Professionally, John was tops at what he did. A combat veteran, he commanded the first attack-helicopter daylight raid into Iraq in the first Gulf War and brought his squad home safely. His children grew up thinking of him as the hero in their very own story. He served as press secretary to the Secretary of the Army and as editor-in-chief of Soldiers Magazine, where he orchestrated coverage of the 9-11 attack on the Pentagon and provided the first images broadcast on CNN. After retiring from the US Army as a Lieutenant Colonel in 2004, John joined the corporate world. Beginning with General Dynamics in Charlotte, NC and then with BAE Systems in Washington, DC, he went on to become Senior Vice President of Communications and Senior Vice President of International Business Development. John was proud to serve as a Board Member of the USO, a member of the Mount Vernon Life Guard Society and a Board Member of the Smithsonian National Air and Space Museum. He had a deep respect and understanding for American history and made its preservation one of his lifelong missions. John is survived by his wife, Michelle; four daughters from his first marriage to Belinda “Chris” Suttle of Fredericksburg, VA: Courtney Suttle Rhines of Rhoadesville, VA; Jessica Suttle Abaunza of Herndon, VA; Kimberly Suttle of Alexandria, VA; Eryn Suttle of Woolrich, PA; father, Harold Woodrow Suttle Jr., sister, Lisa Bonine and brother, Jason Suttle of Fayetteville, AR; grandson Silas Rhines and granddaughter Payson Hartman. Granddaughter Madelyn Hartman, age six, has been waiting for her grandfather in Heaven since July 20, 2019. A celebration of John’s life will be held at Stone Tower Winery in Leesburg, VA on Thursday, November 7 at 2:00 pm. Services at the Ft. Myer chapel in Arlington National Cemetery with full military honors will be held on Friday January 31, 2020 at 1:00PM In lieu of flowers, the family requests donations to any of the three organizations where John had been a board member: the USO, www.USO.org, Mount Vernon, www.mountvernon.org/donate, or the Smithsonian National Air and Space Museum, https://airandspace.si.edu/support.

The family of John Emmett Suttle created this Life Tributes page to make it easy to share your memories.

Send flowers to the Suttle family.