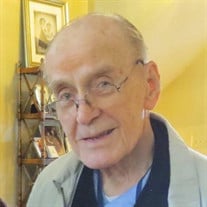 John A. “Jack” Wyatt, of Leesburg, VA, most recently residing at Meadow Glen in Leesburg, VA, passed away on Monday, January 21, 2019 at Inova Loudoun Hospital after a lengthy battle with congestive heart failure. He was 87 years old. Jack was born on November 15, 1931 in Galesburg, IL to Edward and Elizabeth (nee Owens) Wyatt and spent his boyhood in Clinton, IA. Jack’s father died when Jack was three years old. As a young boy, Jack assisted in the support of his family by beginning to work at a bakery when he was 10 years old while attending school. Jack excelled academically and attended St. Mary’s Catholic High School in Clinton, IA and later at Lyons High School where he graduated in 1949. He entered the US Marine Corps in 1951, serving as an aviation electronics specialist during the Korean War. Jack was stationed in Japan, a country he later visited many times during his professional career as an Engineer. Jack left the Marines in 1954 at the rank of Staff Sargent and having earned the Korean Service Medal, the United Nations Service Medal, and the National Defense Service Medal. In 1954, upon his discharge from the Marines, Jack settled in Miami, FL where he married the love of his life, Margaret Mary “Peggy” (nee Brown), on September 26, 1954. Using his GI Bill, Jack obtained his BS in Electrical Engineering from the University of Miami in 1958. Upon graduation, Jack and Margaret relocated to Northern Virginia eventually settling in Annandale, VA in 1966 where they lived until Margaret’s passing in 2013. While raising their family, Jack worked first as a civilian for the Department of the Navy, and later for the Department of Defense. During his career with the Federal Government, Jack earned an MS in Systems Engineering from the University of Southern California in 1977. Jack retired from the US Government in 1989 after 32 years of federal service. He then served as Vice President of Engineering at the Electronic Industries Association until his final retirement in 1996. During his retirement years, Jack enjoyed reading, traveling, going to NARFE meetings, and attending classes at Northern Virginia Community College’s Lifetime Learning Institute; he especially loved the poetry classes. As a lifelong Catholic, he was actively involved with Holy Spirit Catholic Church in Annandale, VA, and went on a pilgrimage trip with a group from this church in the spring of 2016, visiting holy sites in France. He was a quiet, kind, and dignified gentleman holding the highest integrity in business and in family life. He was a wonderful father who always took care of his children and did the best he could to teach and guide them. He was a loving grandfather and uncle to many. He was loved. He is preceded in death by spouse, Margaret Mary Wyatt; parents, Edward and Elizabeth Wyatt; brothers, Harold Wyatt, Don Wyatt, and Gene Wyatt; and sister, Betty Lou Kelly. Mr. Wyatt is survived by children, John D. Wyatt (Abigail) of Leesburg, VA; Sydney Kisseberth (Nicholas) of West Lafayette, IN; grandchildren, Emma Wyatt, Alexander Wyatt, Colin Kisseberth, Rhys Kisseberth, Molly Margaret Kisseberth, and Autumn Kisseberth; and a host of nieces, nephews and other beloved friends and relatives. A graveside service will be held at Arlington National Cemetery, on a date to be determined, where he will rest peacefully for eternity with his love, Margaret. For those who wish, memorial donations in Jack’s name can be made to the American Heart Association.

John A. &#8220;Jack&#8221; Wyatt, of Leesburg, VA, most recently residing at Meadow Glen in Leesburg, VA, passed away on Monday, January 21, 2019 at Inova Loudoun Hospital after a lengthy battle with congestive heart failure. He was 87 years... View Obituary & Service Information

The family of John A. Wyatt created this Life Tributes page to make it easy to share your memories.

John A. “Jack” Wyatt, of Leesburg, VA, most recently residing...

Send flowers to the Wyatt family.