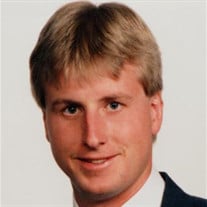 John W. Young, age 54, of Leesburg, VA, passed away on Monday, August 26, 2019, at Capital Caring, Adler Center in Aldie, VA after a long battle with pancreatic neuroendocrine cancer. Born Friday, September 4, 1964 in Hartford, Connecticut, he was the son of the late John R. Young and Diana Ramsdell. He was the nephew of Norman and the late Evelyn Young whom considered him to be their heart, soul, and treasure. He is survived by his wife of 26 years, Elizabeth A. “Betsy” Young and their two sons: Alex and Luke Young, sisters: Corinne (Roger) Wassmuth, of Somers, CT and Kimberly Andrews of Enfield, CT and a brother Kenneth (Anicia) Young of Somers, CT, his mother-in-law Susan MacPherson and numerous nieces, nephews and other family members. He was preceded in death by his parents, his nephew, and his beloved Aunt Evelyn Young. John had a 32 year career as an aircraft mechanic with United Airlines, at SFO, LAX, and Dulles where he developed many close friendships. He made multiple trips across the country on his motorcycle and had numerous hobbies and interests, However, being a father to his two sons, Luke and Alex, was his greatest source of achievement, pride, and inspiration. They adored their father. This kind man will be dearly missed and in our hearts forever. A Memorial Service will be held on Friday August 30, 2019 at 10:30AM at Loudoun Funeral Chapel 158 Catoctin Circle SE Leesburg, VA 20175 with Pastor Justin Ritt officiating. The family will receive friends from 9:30AM until the time of the services. In lieu of flowers the family requests donations be made to the Luke and Alex Young, college fund, ℅ Elizabeth Young or the Adler Center for Capital Caring at 24419 Millstream Drive Aldie, VA 20105.

The family of John W. Young created this Life Tributes page to make it easy to share your memories.

Send flowers to the Young family.