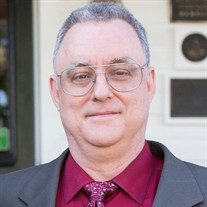 Jonathan Andrew White, age 56 died on Wednesday, November 4, 2020, at home in Ashburn, Virginia. Born November 9, 1963 in Rochester, New York, he was the son of Leonard White and Caroline Knight White. A graduate of East Greenwich High School in East Greenwich, Rhode Island and Strayer University in Herndon, VA, Jonathan served our country from 1981 to 1989. He did his basic training in Ft Knox, KY and drove tanks in Fulda, West Germany for two years. He then served in the reserves state-side for a few years before he re-enlisted, driving trucks at Ft Lewis, WA until his unit was deployed to South Korea. Jonathan continued to drive trucks after his service but then took his interest in technology and parlayed it into a career in IT with some of the early bandwidth providers and then in education at the State University of New York at Brockport and The College of New Rochelle. Most recently, he wanted to give back to the military he so admired by using these skills to help veterans navigate the technological processes needed to get tele-medical care during this pandemic. A man of few words but generous deeds, Jon is remembered for his willingness to help people with anything needed. From giving rides to veterans to health care appointments to helping neighbors set up computers or upgrade technology, Jon never looked for praise or reciprocation but showed his regard through actions. Jonathan had an avid interest in military history and military war games with a large collection of books and games that he is donating to the local club. Jonathan is survived by his parents, Leonard and Caroline White, siblings Brian White & Amy White-Steiner and his nephew Michael White. Viewing hours will be on Friday, November 27 from 6:00pm to 8:00pm at Loudoun Funeral Chapel located at 158 Catoctin Circle, SE Leesburg, Virginia 20175. Mass will be said on Saturday, November 28th at 10:00 AM at St. Theresa’s Church, 21370 St. Theresa Lane, Ashburn, VA. Interment will be in Quabbin Park Cemetery, Ware, MA at a later date. Online condolences may be made to the family at on Jonathans Memorial Facebook Page:https://www.facebook.com/groups/816941242440350/?ref=share In lieu of flowers, donations could be made to: Catholic Charities at https://secure2.convio.net/ccusa/site/Donation2?df_id=2341&2341.donation=form1&mfc_pref=T&s_src=CCUSASITE&_ga=2.26589817.531080379.1604795525-182229589.1604795525 Or Salvation Army at https://give.salvationarmyusa.org/give/164006/#!/donation/checkout?utm_source=google&utm_medium=cpc&utm_term=red_kettle_brand&utm_content=uss&utm_campaign=red_kettle_national&pid=cpc:red_kettle_national::google_trg:::::uss:red_kettle_brand:brand Or Vassal Engine: Vassal is a non-profit game engine for building and playing online adaptations of board games and card games. Vassal runs on all platforms, and is free, open-source software. This program supported Jon’s board game hobby and was near and dear to his heart. https://www.paypal.com/donate?token=uAECyo-Fs-UqaZPPRk81qTyVQ5tdCt-LUdEG5Ti0uhBf6_WNsRZeMBPuelaga2EE5Xjh7QlEoZIiNkGM

The family of Jonathan Andrew White created this Life Tributes page to make it easy to share your memories.