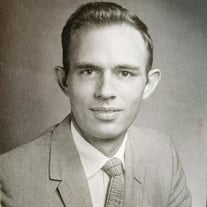 Joseph William James of Round Hill, Virginia, was born in a small house in Sedgewickville, Mo., on December 27, 1933. On January 21st, 2022 he passed into our Father God’s hands to be with his wife, Mary Ann, son Bruce Wayne, parents and siblings that have moved on before him. Joseph was the son of the late Loya James and Mahala Simmons James. As a young child, he learned to work in the Midwest in Missouri farming and doing timber work on the family land. By the age of 14, he ventured out on his own with his uncle David across the country by working various fruit and vegetable picking fields. After returning home, he decided to enlist in the Navy and was assigned duty in the Gulf of Mexico off the Texas coast. It was there at the age of 19 years old that he met the love of his life, Mary Ann Peevey. He went on to serve 20 years in the service and retired as a Coast Guard Warrant Officer. He worked for the next 40 years as a consultant in US National Security helping to secure our nation’s most valuable assets. He finally retired at the age of 80 years young. Joseph completed his primary education at 8th grade, finished his General Education Degree while in the Navy and went on to complete two Associates Degrees, a Bachelors degree in Criminal Justice, and a Doctorate in Environmental Science. He was a voracious reader, reading over 100 books in 2021, and an author of numerous poems and books. Joe and Mary Ann Peevey were united in marriage devoted to each other in this earthly world for 60 plus years. His loving wife went on to our Lord and Savior on April 21, 2014, and Joe and Mary are rejoicing with the angels in heaven. Joe is survived by his three children, Terrie Carmell and husband Tim, Randy James and wife Debbie, Kathy Fields and husband Ray, twelve grandchildren, Kristina Maddox and husband Chris, Daniel Hensley and wife Shelby, Brian James, Stephanie Wiggins and husband Devon, Joseph Hensley and wife Michelle, Conor James, Sean James, Dillon James, Grace Fields, Aidan James, Faith Fields, and Kevin James; and six great-grandchildren, Anna Maddox, Kaleb Hensley, and Levi Hensley, Chase Maddox, Josiah Hensley, and Cece Wiggins; two siblings, Nellie Diesel Lyons, and Jessie Dubois and husband Dan; and a host of nieces and nephews. Joe was predeceased by his son Bruce James, siblings Helen James, Judy Daniels, Ben James, Frank James, Don James and his parents Loya and Mahala James. Joseph held a special bond with his family, children, grandchildren, and great-grandchildren that will long survive his passing. He inspired all to have the highest work drive and to always enjoy family.

Joseph William James of Round Hill, Virginia, was born in a small house in Sedgewickville, Mo., on December 27, 1933. On January 21st, 2022 he passed into our Father God&#8217;s hands to be with his wife, Mary Ann, son Bruce Wayne, parents... View Obituary & Service Information

The family of Joseph William James created this Life Tributes page to make it easy to share your memories.

Joseph William James of Round Hill, Virginia, was born in a small...

Send flowers to the James family.