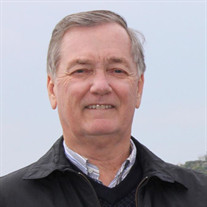 Col. (Ret.) Joe McCue passed away on Thursday, 25 October 2018, at 4:45pm after a long-fought battle with cancer. Joe was born 12 January 1949, in Brooklyn County New York, to James and Grace McCue. As a child, the family moved often throughout the state with Joe attending school at St Pascal Baylon Elementary, St Aiden’s, and finally Mineola High School in Nassau County where they called home for the next 50 years. Joe enjoyed playing sports throughout his childhood, most notably baseball, where he played at various levels of competition for twelve years. Never the “star athlete”, Joe appreciated the comradery, sportsmanship and intellectual strategy that surrounded the contest, which no doubt led to his career calling. Joe went on to graduate from St John’s University, New York in 1970, directly followed by joining the U.S. Air Force where he was commissioned as a Second Lieutenant in November that same year at Lackland AFB, Texas. Soon after Joe was accepted into flight school where he would start his distinguished career as an Air Force aviator. He attended flight school at Mather AFB, California, followed by Bombardier training, and was assigned to fly the B-52 at Beale AFB, California. He excelled (as one would expect) in the Air Force and his sense of duty as an aviator and officer resulted in his quick promotion to the rank of Captain. His next assignment was flying the renowned FB-111 out of Plattsburgh AFB, New York where he spent four years in his home state and close to family. Following this tour, his subject matter expertise earned him an assignment to the HQ Strategic Air Command in the Office of Weapons and Aircraft Flight Testing, where he served two years and again was promoted attaining the rank of Major. In September 1982, Joe competed for and was awarded a Special Duty assignment to commence an arduous and challenging year of training in the SR-71 at Beale AFB, California. This assignment would prove to be one of historical significance. Joe would be the 130th operational crewmember to fly in SR-71. His days of not being the “star athlete” were quickly forgotten as he was breaking the sound barrier all whilst enjoying the comradery of his squadron colleagues. His first flight on 24 September 1982 exceeded 3 times the speed of sound at over 80,000 feet. He amassed 498 SR-71 flight hours and flew until 1986 when he was selected for promotion to Lieutenant Colonel. Next, he was assigned to the Pentagon in Virginia landing in the Office of Acquisition, managing special projects as the Program Manager for the SR-71 aircraft he once flew. While at the Pentagon, he was promoted to Colonel and worked in several offices including the Office of the Secretary of Defense, the Office of the Chief of Staff of the Air Force, and Office of the Secretary of the Air Force. After nine years at the Pentagon, Joe was selected to teach acquisitions at the Industrial College of the Armed Forces, the Air War College, and at the Defense Acquisition University. Joe’s final Air Force assignment was back to the Pentagon as Division Chief in the Office of Theater and Missile Defense. After retiring from the Air Force in December 2000, Joe worked for Boeing, Raytheon, and several defense related business consulting firms in the Washington DC area. Joe fully retired in August 2016 as a disabled veteran to fully attack his fight with cancer head on. Joe constantly pursued his educational and intellectual aspirations receiving a PhD in Public Administration from the University of Alabama in 2003 and was a published author. Joe is married to Deb and has four children and five grandchildren. Joe’s hobbies included reading, playing golf, swimming, engagement in the arts and of course stimulating conversations about politics. He enjoyed spending time with Deb and the family and hosting a multitude of family related activities and community barbecues. They lived in their in Leesburg, Virginia and particularly relished the family gatherings at the backyard pool, while playing with the grandchildren. We all are blessed to have known Joseph James McCue. He was a kind, caring, compassionate, confident, empowered, intelligent and vibrant man worthy of our love and belonging. He was always his genuine self and impeccable with his word which came from a place of authenticity – his heart. We will miss him dearly. Services will be held at Arlington National Cemetery on Monday October 28, 2019 at 3:00PM with full military honors. Please arrive at the administrative building at 2:15PM. The family requests donations be made to Life with Cancer. www.lifewithcancer.org/get-involved/ways-to-donate/

Col. (Ret.) Joe McCue passed away on Thursday, 25 October 2018, at 4:45pm after a long-fought battle with cancer. Joe was born 12 January 1949, in Brooklyn County New York, to James and Grace McCue. As a child, the family moved often throughout... View Obituary & Service Information

The family of Joseph James McCue created this Life Tributes page to make it easy to share your memories.