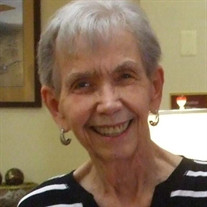 JOUETT TAYLOR PRISLEY Judy Prisley died peacefully in her sleep early Sunday morning, Feb. 21st at Falcons Landing in Sterling, VA. She was born on Dec. 9th, 1928 in Sebring, FL, the daughter of Clark Arnett Taylor of Versailles, KY and Sarah Tradewell McIntosh of Columbia, SC. Judy grew up in Sebring during the Great Depression and removed with her family in 1941 to Winter Haven, FL where she attended high school during the war years. She graduated in 1945 from Winter Haven High School, attended St. Mary’s College in Raleigh, NC for two years, and transferred to Florida State University in Tallahassee, where she graduated in 1949. After graduation, Judy worked as one of the first women newspaper reporters at The Tampa Daily Times until 1953. She married in 1954 to her brother Arnett’s shipmate, Navy submariner Lt. John Post Prisley. She was proud to be a Navy wife and she raised their three children, moving frequently to new duty stations including Key West, Washington DC, Manila, Norfolk, Philadelphia, and Monterey. Over the years, Judy enjoyed working part time jobs with a variety of organizations such as the United States Information Service, the Turkish Embassy, the Idaho-Wyoming Press Bureau office in Washington DC, and the firm National Media Analysis, also in Washington. Jack retired from the Navy in 1973 and they resided in Vienna, VA until 1981, when they moved to Harpers Ferry, WV, built a retirement home, and resided there for the next 14 years. In 1996, they became charter residents of the Falcons Landing retirement community in Sterling, VA where they resided for the remainder of their lives. Throughout her life, Judy retained the adventurous spirit of her childhood and became very adept at the frequent family moves to new Navy duty stations. She enjoyed traveling and exploring new environs, recorded the family’s adventures in letters and journals, and sought out opportunities to volunteer her time and talent with a variety of organizations including the Navy Relief Society, the American Red Cross, and the churches she attended wherever she found herself. She enjoyed family history and genealogy, was a prolific correspondent, and sustained relationships with hers and Jack’s parents, aunts, uncles, cousins and an ever-growing list of friends, neighbors, and fellow parishioners. Judy was predeceased by her husband Jack and her brother Arnett Taylor. She leaves her legacy with her three children Fred, Steve, and Elizabeth, seven grandchildren, five great grandchildren, and her sister-in-law Suzanne (Prisley) Rockefeller. Friends and family members are encouraged to make donations to their favorite charities in memory of Judy. Please share online condolences with the family at www.loudounfuneralchapel.com

The family of Jouett Taylor Prisley created this Life Tributes page to make it easy to share your memories.

Send flowers to the Prisley family.