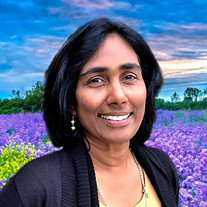 Juanita Naomi Koilpillai, 58, of Tracy’s Landing, Maryland, died on Sunday, July 25, 2021. Born on May 11, 1963 in Sri Lanka, Juanita was the daughter of Wilfred Koilpillai and Jean Jesudian. Both of her parents are deceased. Juanita grew up in Chennai (Madras), India, surrounded by a large and supportive family, and had many opportunities to travel internationally. This planted a life-long love of travel, and throughout the years Juanita visited countless countries on business and pleasure. She attended Women’s Christian College (WCC) in Chennai from 1980-1983, and then attended the University of Kansas (Lawrence) from 1984-1990. There, Juanita earned dual Masters Degrees in Mathematics (‘87) and in Computer Science (‘90). Upon graduation, she moved to the Washington, DC area. Juanita co-founded Mountain Wave in 1998, a cybersecurity startup, and sold the company to Symantec in 2000. Most recently, she was the Founder and CEO of Waverley Labs, a cyber risk engineering company and a pioneer in Digital Risk Management. She had 30 years' experience researching and developing systems in computer security, network management, and real-time distributed software. Juanita was a luminary in her field and broke many glass ceilings on her path to becoming founder and chief executive at two successful start-ups. In return, Juanita shared her knowledge by mentoring young women with careers in technology. In 2001, Juanita and her former husband bought Waverley, an historic property and farm in Waterford, Va, where she became an advocate for historic preservation and land conservation. In 2018, Juanita acquired a cottage in Tracy’s Landing, Md, on the Chesapeake Bay, and became an accomplished sailor. Juanita also owned residences in Leesburg and Upperville, Va. She was beloved throughout the community and had a natural gift for radiating life, light, and love to everyone she met. Juanita was a brilliant, highly talented, and creative individual who loved her family and friends and was passionate about life. Upon entering a room, Juanita would immediately galvanize everyone with her infectious smile, her commanding presence, her amazing grace, and her vivacious personality. Faith and spirituality were important touchstones in Juanita’s life. She attended Egmore Wesley Church and youth group with her family in India, and currently attended Catoctin Presbyterian Church in Waterford and Friendship Community Baptist Church in Dunkirk, Md. Generosity was also an important value to her. She created a philanthropic fund in memory of her father and founded MERGE, a non-profit to support local youth projects. Juanita’s lifelong love of music started at a young age, and this passion continued throughout her life. Her father, who played the accordion, gave Juanita her first keyboard, which she played, along with the guitar, with cousins, friends and her own children. She continued this love of music as a member of the Waterford Concert Series, which brings world-class musicians to audiences in Waterford, Va. In addition to raising her two children, Juanita pursued many dreams while living in Waterford, including hosting parties and events that showcased her hospitality. Juanita was a Loudoun County Master Gardener and her extensive gardens at Waverley were breathtakingly beautiful. She was a spectacular cook, mastered many cuisines, and taught cooking classes. With indomitable energy, Juanita launched Boots and Breakfast which provided networking opportunities and career development for women in Waterford. Juanita also helped her former husband produce “Fair Play,” an original live-action feature film that showcased the talents of her children and featured local teens and adults as lead actors. Juanita is survived by her daughter Tate Beavers (21), son Andrew Beavers (23), and brother Andrew Koilpillai. She leaves behind her significant other Alex Finley, and her former husband John Beavers, as well as her sister-in-law Kim Koilpillai, niece Hana Koilpillai, two nephews Caleb and Jonah Koilpillai, many beloved cousins, uncles, and aunts across the world, and innumerable colleagues and friends. Please share online condolences with the family at www.loudounfuneralchapel.com In lieu of flowers, please consider a memorial contribution to “A Place to Be” http://www.aplacetobeva.org in Middleburg, Va. and the “Waterford Foundation” https://www.waterfordfoundation.org in Waterford, Va. Services were held privately by the family.

Juanita Naomi Koilpillai, 58, of Tracy&#8217;s Landing, Maryland, died on Sunday, July 25, 2021. Born on May 11, 1963 in Sri Lanka, Juanita was the daughter of Wilfred Koilpillai and Jean Jesudian. Both of her parents are deceased. Juanita grew... View Obituary & Service Information

The family of Juanita Naomi Koilpillai created this Life Tributes page to make it easy to share your memories.

Send flowers to the Koilpillai family.