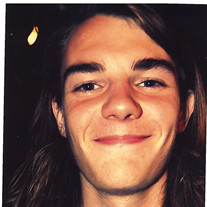 Juddson Matthew Jackson, 28 was hit by a train and killed in West Palm Beach, FL on Thursday, February 13, 2020. Born on Monday, January 13, 1992 in Warrenton, VA he was the son of David A. Jr. and Teri L Jackson. He was preceded by his maternal grandparents Charles W. & Barbara June Matthew McIntosh and his paternal grandparents David A. Sr. & Catherine E. Jackson. He grew up in Loudoun County Virginia. He attended Aldie Elementary School, J. Lupton Simpson Middle School, Mercer Middle School and Freedom High School. Juddson was baptized as a young teenager at Leesburg Community Church. He went on one youth mission trip to New York City working with intercity children. That’s when he learned as a country boy, he liked big city life and all it had to offer. His favorite thing to do was go fishing. He really liked to catfish. Later in life while living in Florida he fished in the ocean. He would love to catch the different types of fish that were not in the Virginia waters. He enjoyed eating them too. Juddson also liked to cook. He had several jobs at different restaurants as a line cook. This was an opportunity for him to explore his culinary skills. As a teenager he was in a band. He liked to sing or scream so his mother heard it from the basement during band practices. Juddson took karate from age 10 to 14. He received a brown belt. He liked cars too. With his PopPop he would join him in many different street rod car shows when he was little. Once he was older, he was interested in tuner cars and attended a car show in New Jersey and locally. Juddson was loved by many. He was kind, fun-loving, always willing to be the clown to make others laugh. His laugh was infectious and will be remembered by everyone who knew him. There will be a private memorial service and interment at his final resting place Stonewall Memory Gardens, Manassas, Virginia. Please share online condolences with the family at www.loudounfuneralchapel.com

Juddson Matthew Jackson, 28 was hit by a train and killed in West Palm Beach, FL on Thursday, February 13, 2020. Born on Monday, January 13, 1992 in Warrenton, VA he was the son of David A. Jr. and Teri L Jackson. He was preceded by his maternal... View Obituary & Service Information

The family of Juddson Matthew Jackson created this Life Tributes page to make it easy to share your memories.

Juddson Matthew Jackson, 28 was hit by a train and killed in...

Send flowers to the Jackson family.