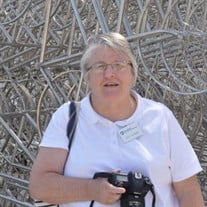 Judith L. Dobbs, age 70, of Ashburn, Virginia, passed away Thursday, November 18, 2021 at her home in Ashburn, VA. Born August 27, 1951 in Pittsburgh, PA was the daughter of the late Evelyne and John Dobbs, and survived by 6 brothers and sisters, Sharon Dowler, John Dobbs, Donna Yocum, Pam Dunay, Laurie Baldwin and David Dobbs, numerous nieces, nephews, great nieces and nephews and long-time friend Sandy Smith. Judy was a dedicated Army office for 20 years retiring as a Captain. After retiring from the Army, she served 22 years as a government contractor with TASC and Northrop Grumman over seeing several Army-wide information security programs. Judy was a graduate of Penn State University and received a Master’s Degree through the military. Judy’s Army career started as enlisted and, after 9 years she attended the Army’s Officer Candidate School at Ft. Gordon, GA. Judy’s passions were photography, gardening and traveling. One of Judy’s items on her bucket list was to make it to all 7 continents which she would have made after a planned trip to New Zealand and Australia. Some of the trips she made included Yellowstone, various locations in Europe and Korea, Antarctica, Iceland, The Arctic, and, most memorable, Tanzania. Each spring, Judy would be found planning her garden of tomatoes, peppers, zucchini, squash, and onions which would often be shared with her family and friends. A visitation will be held at the Loudoun Funeral Chapel and Crematory on Friday December 3, 2021 from 2 pm to 4 pm followed by a meal at the Mills Recreation Center, located at 43895 Grottoes Drive, Ashburn, Virginia. Family requests no flowers be sent but donations to your favorite charity in Judy’s name would be appreciated.

Judith L. Dobbs, age 70, of Ashburn, Virginia, passed away Thursday, November 18, 2021 at her home in Ashburn, VA. Born August 27, 1951 in Pittsburgh, PA was the daughter of the late Evelyne and John Dobbs, and survived by 6 brothers and sisters,... View Obituary & Service Information

The family of Judith Lynne Dobbs created this Life Tributes page to make it easy to share your memories.

Send flowers to the Dobbs family.