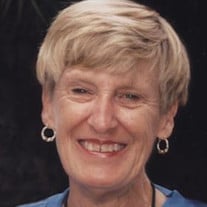 Judy Jones Brinegar, 74, departed this world on January 30, 2020, at Inova Loudoun Hospital in Lansdowne, her husband Paul at her bedside. Judy was the only daughter of Percy and Madeline Jones. She was born February 21, 1945 and grew up in Norfolk, Virginia. She graduated from Granby High School and Old Dominion College (class of 1966), receiving a Bachelor’s Degree in Education. Judy began teaching fourth grade elementary school soon after graduation. She and her husband Paul were married on April Fool’s Day, 1967, moved to northern Virginia in 1971, eventually coming to Leesburg in 1975. Judy is survived by her husband Paul, her son Paul II "Monty", and her daughter-in-law Dana. Judy was very active in volunteer work throughout her life. The Junior Woman’s Club of Loudoun, Loudoun County Victim Witness Program, Loudoun County Transportation Safety Commission, Bull Run ASAP, and Virginians Opposing Drunk Driving were among the organizations she supported with her efforts. For several years in the late 1980s and early 1990s, Judy and her friend Laura Edwards owned a knitting shop in Leesburg, catering to the needs of knitters throughout the area. They organized local knitters to provide knitted headbands for troops during the first Gulf war. In her later years, Judy enjoyed traveling with her husband. She always enjoyed the beach, and absolutely fell in love with Aruba; Judy and Paul would return to Aruba so often that they were declared “honorary ambassadors”. Always a conversationalist, Judy enjoyed spending time talking with friends and family. A short phone call easily could stretch into an hour, and yet it would often seem like so little time had actually passed. We will truly miss conversing with her. Visitation is from 6 to 8 p.m., Friday, February 7, at Loudoun Funeral Chapel in Leesburg, Virginia. Funeral services will take place at 1 p.m., Saturday, February 8, at the same location. Judy’s wish was to be buried with her parents in Norfolk, which will take place later in the year.

Judy Jones Brinegar, 74, departed this world on January 30, 2020, at Inova Loudoun Hospital in Lansdowne, her husband Paul at her bedside. Judy was the only daughter of Percy and Madeline Jones. She was born February 21, 1945 and grew up in... View Obituary & Service Information

The family of Judy J. Brinegar created this Life Tributes page to make it easy to share your memories.

Send flowers to the Brinegar family.