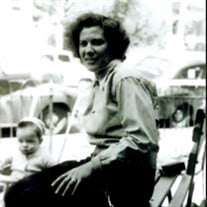 June Elizabeth (King) Madigan was truly a renaissance woman who lived life to the fullest. A fiercely loyal and devoted daughter, sister, wife, mother, grandmother and aunt, there wasn’t anything she couldn’t do if she made up her mind to do it. She held the unique distinction of being the first woman to obtain a motor cycle license in Washington, D.C. During World War II, June served her country as a military driver for Navy personnel escorting various generals and most notably, Robert Stack, around town. Born on July 18, 1923 in Fairfax, Virginia, June and her six siblings had very little to call their own. Yet, she made sure their lives were filled with fun, adventure, and most of all, music. Never known to be shy, she seized the opportunity to sing on the radio and on the streets of D.C. before she was ten years old. June was no stranger to hard labor either. For many years she worked as a weigh master and made and transported TNT for a local rock quarry, and along with her husband, James Benjamin Madigan who she married in 1941, farmed the fields on their land in Ashburn, Virginia. Later on, she managed three floral shops designing floral arrangements for all occasions. June’s two children, Jim and Ginger, could often find her singing and worshipping the Lord in the privacy of their home while the music of Mahalia Jackson played in the background. It was simply impossible to be downcast in her presence, for wherever she was, there was a celebration of life. Her enthusiasm and laughter was contagious as she drew others into a game of marbles, cards, or “cutting the rug” to jitterbugging music. June was quick to pick up a guitar, ukulele, harmonica or accordion to sing praises to the Lord. In fact, family gatherings always included a symphony of harmony as everyone sang the great songs and choruses of the faith. June was faithful to use her considerable musical talent to lead worship at her local church and at the church campgrounds in Falling Waters, West Virginia. While it is true that she loved to sing and dance, more than anything else she loved to share her Savior with anyone who would listen. Her life was a living testimony of God’s love and mercy, and her rich legacy as a daughter of the Most High God will continue to live on. Even though she no longer graces our lives with her presence, we hold tight to the promise that one day soon we will join her in singing songs of praise and adoration around the throne of God. For now we echo the words, “Well done, thou good and faithful servant!” She is survived by her children: James B Madigan Jr (wife Becky) of Leesburg VA., Ginger Madigan of Williamsburg VA., grandchildren: Jennifer June Wigfield (Josue' Santos) of Leesburg VA., James Wesley Madigan (Martha) of Charlottesville VA., Austin King Madigan (Jessica) of Leesburg VA., Andrew Edwin Madigan of Leesburg VA., Chase Brooks Madigan of New York, NY., and Jessica Quinn Ortega (Blake) of Asheville, NC., great grandchildren: Juna of Leesburg VA., Brynley, Asher, Ryder of Charlottesville VA., and Savannah, Austin Jr, Kimber, Luke Leesburg VA., and sister Virginia Allen of Fredericksburg VA., She was preceded in death by her husband James B Madigan Sr in December 1990.

June Elizabeth (King) Madigan was truly a renaissance woman who lived life to the fullest. A fiercely loyal and devoted daughter, sister, wife, mother, grandmother and aunt, there wasn&#8217;t anything she couldn&#8217;t do if she made up her... View Obituary & Service Information

The family of June Elizabeth Madigan created this Life Tributes page to make it easy to share your memories.

June Elizabeth (King) Madigan was truly a renaissance woman who...

Send flowers to the Madigan family.