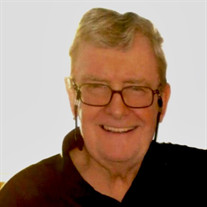 Kenneth Ross McAlpine, Sr.,age 87, from Crozet, VA, and formerly from Warren, Michigan, passed away with his wife by his side, on Wednesday, December 4, 2019, after a short illness. Ken was born February 1, 1932 in Detroit, MI to Ross Kenneth McAlpine and Martha Victoria McRae. Ken left behind his wife, Juanita McAlpine. He is also survived by his brother, Robert McAlpine (Dolores), four children: Susan Woodhouse(Daniel), Karen McAlpine, Jennifer Neiman (Keith), Kenneth Ross McAlpine, Jr.,(Barbara); two stepchildren, Jeffrey Armstrong (Joan) and Mark Armstrong (Mary); eleven grandchildren and ten great grandchildren. Ken obtained a Juris Doctorate from the Detroit College of Law in 1953. He began his over 50 year law career as an Assistant Prosecuting Attorney for the County of Macomb, moving on to become city Attorney for the City of Warren from 1959 to 1963. Ken went into private practice after leaving the City Attorney's Office, specializing in Zoning and eventually moved on to practice Criminal Law, where he stayed for the remainder of his career. Anyone who has known Ken has a story to tell and his quick wit, sense of humor and joke telling skills were legendary. He had a command of the English Language like no other, as well as the ability to mesmerize a jury. Ken, affectionately referred to as Granpa Stinky, Mac or Macadoo, loved playing golf, bridge, traveling, listening to Jazz and celebrating St. Patrick's Day. He will be missed by many and never forgotten. There will never be another one like him. A memorial service will be held on Tuesday, December 10, 2019 at 3:30pm at Clifton Presbyterian Church located in Clifton, Virginia. A celebration of Ken's life will be held at Trummers Bistro adjacent to the church following the service. In lieu of flowers, the family would appreciate donations being made to The Alzheimer's Association (http://act.alz.org//goto//georgiesgals)

Kenneth Ross McAlpine, Sr.,age 87, from Crozet, VA, and formerly from Warren, Michigan, passed away with his wife by his side, on Wednesday, December 4, 2019, after a short illness. Ken was born February 1, 1932 in Detroit, MI to Ross Kenneth... View Obituary & Service Information

The family of Kenneth Ross McAlpine Sr. created this Life Tributes page to make it easy to share your memories.

Send flowers to the McAlpine family.