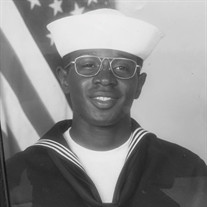 Kenny Lee Dorsey, husband, father, and friend passed away on January 23, 2021 in Loudoun County Virginia. He was born November 25, 1963 in New Orleans to Henry F. Merridth, Jr. (Tammie) and Ceola Dorsey Mitchell. Kenny was baptized at True Vine Baptist Church in Westwego, Louisiana, at the young age of 10. He graduated from West Jefferson High School in Harvey, Louisiana. Shortly after graduation, he enlisted in the United States Navy obtaining the rank Petty Officer First Class serving honorable for 15 years. Kenny married his best friend and teenage sweetheart, Odette Marie Johnson. They were married for 30 years and during this time Odette, his wife, became affectionately known to the family as his “Pookie Bear”. Kenny has lived in Northern Virginia for over 30 years and after moving to Ashburn Virginia, the family started attending Heritage Baptist Church where he was a member for over eleven years. Family meant everything to Kenny which is why he was a hard-working man often working multiple jobs to provide for his family. He primarily worked for Freddie Mac for 22 years. One of Kenny’s favorite past-times was eating Popeye’s Chicken. His family referred to him as a “chicken loving, Popeye’s eating, chicken man”. Kenny recently discovered that he was the oldest of 19 children that included his late brother and friend, Albert Andrew Jr. In addition to his wife, Kenny leaves three children to cherish his memory: Okoya Avella-Lee Dorsey, Kennedy Skylar-Inira Dorsey, and McKenzie Raquel-Akayla Dorsey. Kenny was known as a good man with quiet strength. He will be deeply missed by his family, friends, and church family. However, because of his personal relationship with the Lord, the family rests assured knowing that he is in Heaven with His Lord praising Him for His goodness and faithfulness. Kenny Lee Dorsey will be laid to rest at Chestnut Grove Cemetery in Herndon Virginia Friday February 19, 2021 at 11:00 am. A Celebration of Life will be held for Kenny Sunday February 21,2021 at 1:00pm at Heritage Baptist Church in Ashburn, VA.

The family of Kenny Lee Dorsey created this Life Tributes page to make it easy to share your memories.

Kenny Lee Dorsey, husband, father, and friend passed away on...

Send flowers to the Dorsey family.