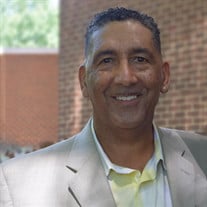 Kim Alan Johnson was born on May 4, 1958 in Bridgeport, Connecticut. He was the son of the late Jean Colesta Patterson Johnson and Jesse Peak, Sr. On Saturday, August 24, 2019, Kim passed away after a 16-month battle with head and neck cancer.... View Obituary & Service Information

The family of Kim Alan Johnson created this Life Tributes page to make it easy to share your memories.

Send flowers to the Johnson family.