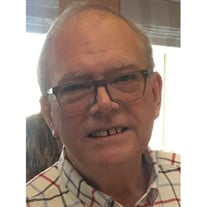 Lance William Haus passed away peacefully on February 20, 2019 in Loudoun County, Virginia. He was born on November 6, 1947 in Nanticoke, Pennsylvania to the late William L. and Phyllis A. Turner Haus. He is survived by his wife of 51 years, Maureen O’Donnell Haus, his daughter Lora Kite (Gary), granddaughter Ashleigh Kite, brother-in-law Joseph O’Donnell, sister-in-law Linda Konetski (Edmund), cousins, and several nieces and nephews. Lance grew up in Wilkes-Barre, Pennsylvania and graduated Valedictorian from Wyoming Seminary in Kingston, PA in 1965. He attended Cornell University in Ithaca, New York where he graduated Magna Cum Laude with distinction in all subjects in 1969. After graduation, he moved back to Pennsylvania to work as a teacher of adult education for the Wilkes-Barre School District. He later returned to Cornell University to complete his PhD graduate work and served as Director of Transportation at Cornell for several years. In 1976, Lance moved his family to Reston, Virginia to begin a 30-year career with the Central Intelligence Agency. He served in many management positions across the organization, rising to the rank of the Senior Intelligence Service. He served on the Board of the Northwest Federal Credit Union and was a member of the American Economic Association. After retirement, he spent nine years living in New Oxford, Pennsylvania with his wife while enjoying a slower pace of life. They returned to Virginia in 2011 to be closer to their daughter and granddaughter, where Lance resided until his passing. When not spending time with his family, Lance loved to be on the golf course. He was an avid reader and loved animals, especially his corgis and cat Middy. Interment will be private. The family asks that you share any memories through the Loudoun Funeral Chapel website – www.loudounfuneralchapel.com. In lieu of flowers, please donate to the American Heart Association or the local Animal shelter or SPCA.

Lance William Haus passed away peacefully on February 20, 2019 in Loudoun County, Virginia. He was born on November 6, 1947 in Nanticoke, Pennsylvania to the late William L. and Phyllis A. Turner Haus. He is survived by his wife of 51 years,... View Obituary & Service Information

The family of Lance William Haus created this Life Tributes page to make it easy to share your memories.

Send flowers to the Haus family.