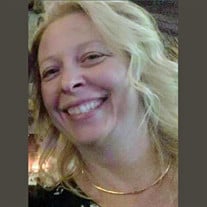 It is with great sadness that we announce the death of Laurie Ann (Oberg) Hilton who died unexpectedly on August 29, 2021 at the age of 44. Laurie Ann was born in Augusta, Maine on February 7, 1977. Laurie grew up in Maine and spent many summers at Sebago Lake, playing basketball and softball, babysitting, learning to fish with her Father, and playing an active role in taking care of her family. She always made education a priority in her life. She attended Assumption College for her BS in Special Education and George Mason University for her MS in Education. She was extremely proud to have a career as schoolteacher. Laurie taught school for Fairfax County and loved every minute of it. She and her co-workers worked tirelessly to educate their students by creating strong bonds with each other and enjoying moments of levity celebrating baby showers, wedding showers, and end of the year celebrations. Laurie met the love of her life Andrew W. Hilton in 1997 and they married in Maine in 2002. They had two wonderful sons together, Andrew and Ashton. Together, Laurie and Andrew formed a collaborative team of husband and wife, but also very best friends always striving to make a loving home for their sons. Laurie not only promoted education in her career but made it a priority for their sons. Along with education, Laurie and Andrew encouraged and supported their sons in sports, primarily soccer and wrestling. Laurie made close friends with the parents on every team her sons played on and was a major cheerleader for her boys. When Laurie and her family were not on the soccer field or watching a wrestling match, they traveled to Sebago Lake in Maine, and Yogi Park in Pennsylvania, where she had some of the happiest moments with her family. Laurie leaves behind her best friend and husband, Andrew, and her two sons, Andrew and Ashton, whom she cherished. She was the daughter of her devoted parents, the late Donald Oberg and her loving mother Grace Oberg, as well as her only sister Ann-Marie Oberg. She also leaves behind many fellow teachers who became friends, the wonderful soccer families that she met and maintained friendships with, her neighbors, extended family, childhood friends, and all who have had the blessing of knowing her. A Requiem Mass will be held at Saint Theresa Catholic Church, 21371 St. Theresa Lane, Ashburn, VA 20147 on Tuesday. September 7, 2021 at 10:30 am. Reception to follow at the Leesburg Volunteer Fire Company, 215 Loudoun St. SW, Leesburg, VA 20175. In lieu of flowers, if choosing to leave a remembrance, the family is accepting donations through Meal Train at -www.mealtrain.com/trains/d8owvv/donate or please donate to the Literacy Program. Online condolences may be made to the www.loudounfuneralchapel.com

It is with great sadness that we announce the death of Laurie Ann (Oberg) Hilton who died unexpectedly on August 29, 2021 at the age of 44. Laurie Ann was born in Augusta, Maine on February 7, 1977. Laurie grew up in Maine and spent many summers... View Obituary & Service Information

The family of Laurie Ann Hilton created this Life Tributes page to make it easy to share your memories.

It is with great sadness that we announce the death of Laurie...

Send flowers to the Hilton family.