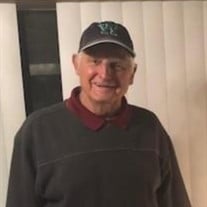 Lawrence Edward Wenner, Sr. of Lovettsville, Virginia passed away comfortably in his sleep on Sunday, January 30, 2022, at INOVA Loudoun Hospital, Lansdowne, VA. Born in Brunswick, MD on September 22, 1938 to the late Herbert Malcom Wenner and late Betty Grove Wenner, Larry, as he was known by friends, proudly worked for AT&T for nearly 30 years. He started as a janitor, then put his years as a laundry truck driver to use and worked as an executive chauffeur until his retirement. A talented athlete, he was known for his skills on the pitcher’s mound in baseball, at one time being named “Loudoun’s Best Pitcher”. He played baseball in the Army from 1956-57 and went very far in a professional baseball tryout for the Pittsburgh Pirates. As much as he loved playing baseball himself, he loved coaching even more … his son, then future son-in-law, and his 5 grandsons. An avid fan of the Washington Football Team, he proudly showed off his “Redskins’ Room” to anyone who visited his home. He excelled at golf, bowling, even playing pool, but perhaps was best known for his contagious smile and positive attitude. Whether he was driving the neighborhood kids to amusement parks or his friends “The Hogettes” or other dignitaries in parades in his big red convertible, he made everyone in his presence feel special. Lawrence was predeceased by his beloved wife, Katherine Frye Wenner, in 2015. He is survived by his daughter Karen Wenner Cooper, and husband Joshua, and son, Larry Wenner Jr., and wife Lisa, all also of Lovettsville. His memory will be forever cherished by those who called him Granddad or “G-Daddy”, his 5 grandsons, Ben Cooper, Trip Wenner (Lawrence III), Ryan Cooper, Chase Wenner and Tyler Cooper. He is survived by his sister Lucy Rutherford of Ranson, West Virginia and many nieces, nephews, cousins and innumerable friends. He is also survived by his very special sister-in-law and brother-in-law, Shirley Frye Sanbower and Reginald Sanbower of Lovettsville, who looked after him for many years. He was predeceased by his brother Herbert Wenner and sister Betty Staubs. Funeral services were held on Thursday, February 3rd at Loudoun Funeral Chapel with the Rev. Roland England officiating. A private burial service with family will be held at Mt Olivet Cemetary in Lovettsville, Virginia. Memorial contributions in Coach Larry’s memory may be sent to Upper Loudoun Little League, PO Box 1122, Purcellville, VA 20134

The family of Lawrence Edward Wenner Sr. created this Life Tributes page to make it easy to share your memories.

Send flowers to the Wenner family.