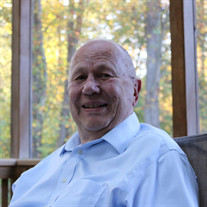 Ledford H. Day, Jr. of Ashburn, Virginia passed away on April 4th in Leesburg, Virginia from complications following brain surgery. He was born on June 23, 1936 in Bloomington, Indiana, the oldest child of Ledford H. Day Sr. and Annabelle Pryor Day. The son of a diplomat, he was raised in many places, including Greece and the Philippines. He attended Indiana University, Washington and Lee University, and received his degree from the University of Connecticut. Led was gifted in mathematics and science, with a deep love of learning. For many years, he was a research technician at Union Carbide engaged in defense industry projects. One of his proudest accomplishments was receiving a patent for his work. When Union Carbide closed their research lab in Tarrytown, NY, he joined a startup company in Stratford, Connecticut that did tumor marker testing for cancers. Led met his true soulmate, Barbara Florio, while living in the Philippines. They married on June 2, 1962. She survives him, as does his daughter Kristen and his granddaughters Katrina and Serena. They were the great joys of his life. He is also survived by his sister Joanne O’Donnell of Fairfax, Virginia and James Day of Green Valley, Arizona. His son Scott Ledford predeceased him on September 6, 2018. Led was a quiet man with a quick wit, an earthy "Hoosier" sense of humor and intense intellectual curiosity. He could speak at least a few words, and often many more, in over 15 languages - and he loved the surprised reactions of people when he communicated with them in their language. He enjoyed playing bridge, following politics, travelling, and spending quality time with his beloved dog, Reggie. Out of respect for his wishes, services will be private. Contributions may be made in his name to the ASPCA (aspca.org). A celebration of his life will be planned for a later time.

The family of Ledford H. Day Jr. created this Life Tributes page to make it easy to share your memories.