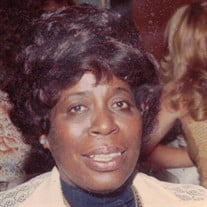 Lena Marie Ambers was born Thursday, December 8, 1921 in Lucketts, Virginia. She was the second child born to the late Charles Ambers and the late Myrtle Pollard Ambers. She peacefully departed this life on Friday, October 9, 2020, at 12:04 am, at the age of 98 years young. Lena grew up in Lucketts, VA, and accepted Christ at an early age. She joined Mt. Pleasant Baptist Church and was baptized by the late Reverend R. L. Nickens. As a young woman she moved to Washington, DC, for better employment; from there she moved to New York City in 1950. Lena was the first of her siblings to move to New York. While there she found employment right away, with Mr. and Mrs. Henry Oachler of New York, New York. She worked very hard for many years until moving back to Leesburg in 1982. Upon moving back to Leesburg, Lena rented an apartment in the same building as her late father; where she helped care for him in his final days. After moving back to Leesburg, she joined Mt. Zion Baptist Church of Round Hill, under the leadership of the late Rev. Thomas Tracey. She served in many capacities including, the Missionary Society, Women’s Auxiliary, and Sunday School. Lena also fellowshipped with the local churches and some not so local. She also became a member of the Baptist Association in Gainesville, VA. In the last year, Lena joined First Baptist Church of Sycolin with Rev. Roy Trammell, officiating. Miss Lena had a ministry of giving to her friends and family through cards and phone calls. Many were blessed by her generous spirit with financial gifts. Lena loved to travel. She was the first in the family to take a cruise and continued to go on many. Lena would invite family and friends to a bon voyage party before she sailed. A good time was had by all. Over the years, Lena became friends with a lot of people. Some were special friends, such as Pat and Ron Gibson and family, Rhonda Walker and family, Edith Ferrell and family, Odessa Criales-Smith, and family and her caregiver Rosa. She leaves her family to cherish her memory including, her sister, Grace Anderson and her brother, Raymond Ambers, of Fort Washington, MD, and Joseph L. Ambers and sister in law Christine Marie Ambers of Leesburg, VA, sister in law Regina Ambers of Paeonian Springs, VA plus a host of many nieces and nephews, cousin’s family and other friends. She was predeceased by siblings, Mamie Hall, Herman Ambers, Viola Gholston, Martha Stokes, Charles Ambers, Jr. and Jesse Preston Ambers, Christine Anderson, and Landon Ambers. A Graveside service will begin at 11:00 AM on Friday, October 16, 2020 at Mt. Pleasant Baptist Church Cemetery located at 41803 Bald Hill Road Leesburg, Virginia 20176. Online condolences may be made to the family at www.loudounfuneralchapel.com

Lena Marie Ambers was born Thursday, December 8, 1921 in Lucketts, Virginia. She was the second child born to the late Charles Ambers and the late Myrtle Pollard Ambers. She peacefully departed this life on Friday, October 9, 2020, at 12:04... View Obituary & Service Information

The family of Lena Marie Ambers created this Life Tributes page to make it easy to share your memories.

Send flowers to the Ambers family.