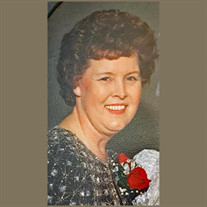 Linda Jacque Jenkins, 77 of Leesburg, Virginia, went home to be with the Lord on Sunday, September 5, 2021 in Sterling, Virginia with her husband, daughter, and son-in-law by her side. Linda was born on a Tuesday, February 22, 1944 in Tyler, Texas. She was the daughter of the late Elmer “Red” Curtis and the late Lucille Curtis Davis, as well as youngest sister to the late Gene Stottlemyer and Sarah Blankenship. Linda married Wayne Jenkins on a Saturday, December 29 and they enjoyed 65 years together. Always one to promote education and opportunity to her children, Linda was a housewife while their six children were young, but became a non-traditional student who finished her Bachelor’s degree in Religious Studies at the University of Kansas once their youngest was in school full-time. Linda is survived by her loving husband, Alton “Wayne” Jenkins, their sons Kenneth Wayne Jenkins, his wife Laurie, and Kenyon Wade Jenkins, his wife Rachel; their daughters Debbie Ann Soar, her husband David, Rhonda Gay McGibbon, her husband Patrick, Lisa Rene Phelan, and Melissa Lynn Swonger, and her husband Darin, their 19 grandchildren, and 15 great grandchildren, as well as her sister Sarah Blankenship, her husband Jerry, her brother-in-law Jim Jenkins, his wife Minerva, and many nieces and nephews. She is preceded in death by their infant daughter, Teresa Annette. A Celebration of Life will be held at 1:00 PM on Saturday, September 18, 2021 at Loudoun Funeral Chapel located at 158 Catoctin Circle, SE Leesburg, Virginia 20175 with the Chaplain Patty Cornwall officiating. This will be a live-streamed service and may be viewed from the Loudoun Funeral Chapel’s website. Condolences may also be expressed to the family online at www.loudounfuneralchapel.com

Linda Jacque Jenkins, 77 of Leesburg, Virginia, went home to be with the Lord on Sunday, September 5, 2021 in Sterling, Virginia with her husband, daughter, and son-in-law by her side. Linda was born on a Tuesday, February 22, 1944 in Tyler,... View Obituary & Service Information

The family of Linda Jacque Jenkins created this Life Tributes page to make it easy to share your memories.

Send flowers to the Jenkins family.