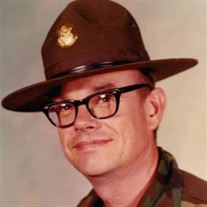 Lyle Allen Wagie, 74, MSG, U.S. Army (Ret.) of Leesburg, VA, peacefully passed away with family by his side, while receiving inpatient care at the Adler Center for Caring in Aldie, VA. MSG Wagie was born on December 6, 1944, to Lawrence and June (née Peep) in Oconomowoc, WI. He grew up in Watertown, WI, where he was a graduate of Watertown High School. He joined the U.S. Army in 1966, where he served two tours in Vietnam. When he returned to the United States, he was stationed at Fort McPherson, GA, where he met his future wife Beverly (née Cary). They were blessed with forty-five years of marriage and three children. MSG Wagie served at many different military locations during his nearly twenty-five year military career. Besides Vietnam and Fort McPherson, he served at the Pentagon as a staff member for the chairman of the Joint Chiefs of Staff. He was then stationed at Fort Polk, LA then Fort Knox, KY, where he served as a Drill Instructor, Fort Stewart, GA and finally Cooke Barracks, Göppingen, Germany. Upon his retirement from the military, MSG Wagie and his wife returned to the Northern Virginia area, where he worked for Freddie Mac, Lansdowne Resort and Food Lion. At home, MSG Wagie was a true family man, where his focus was taking care of his wife, children and grandchildren. MSG Wagie is survived by his son Christopher (Kenneth) of Leesburg, daughter Erica Golden of Leesburg, grandchildren Emmanuel, Laniea, Lorenzo, Jayla, Tyrell and Dominique, sister Lucy (Robert) Bobholz of Wales, WI, sister-in-law Judy Martinez-Leister (David) of Sugarloaf Key, FL, along with other treasured family and friends. MSG Wagie was preceded in death by his parents, wife, daughter Malinda (Toefield) and brother Dean. A visitation will be held on Thursday, January 3, 2019 from 6:00 to 8:00 pm at the Loudoun Funeral Chapel, 158 Catoctin Circle SE, Leesburg, VA. Graveside services will be held on January 4, 2019 at 1:00 pm at Quantico National Cemetery, Triangle, VA. In lieu of flowers, donations may be made to Capital Caring, Attn: Philanthropy Office, 2900 Telestar Court, Falls Church, VA 22042.

Lyle Allen Wagie, 74, MSG, U.S. Army (Ret.) of Leesburg, VA, peacefully passed away with family by his side, while receiving inpatient care at the Adler Center for Caring in Aldie, VA. MSG Wagie was born on December 6, 1944, to Lawrence and... View Obituary & Service Information

The family of Lyle Allen Wagie created this Life Tributes page to make it easy to share your memories.

Send flowers to the Wagie family.