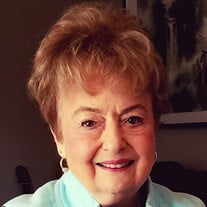 Margaret Waldo Fera May 2,1942 to February 1, 2020 Margaret Waldo Fera, age 77, of Leesburg passed away on Saturday, February 1st. Margaret, who was known to most people as “Peggy” was born in Portsmouth, Virginia on May 2, 1942. She was the daughter of Robert Hendren Waldo and Margaret Irving Waldo. Peggy graduated from Churchland High School in 1960 and received her undergraduate degree from Longwood University in physical education. She played basketball and field hockey and was a member of the Alpha Gamma Delta sorority while at Longwood. Peggy’s professional career ranged from physical education teacher to medical assistant to office assistant at her beloved Aldrin Elementary school. All of which had a common thread of helping others. Peggy was the epitome of loyalty and altruism. She was a devoted mother, wife, and friend. She volunteered countless hours helping her community. She was a longtime member of the Loudoun hospital ladies board where she worked tirelessly each year during the infamous rummage sale. She worked with Loudoun Breast Health Network and Loudoun Nature Conservancy. Peggy enjoyed socializing with her book clubs, bridge group, water aerobic friends, and recently the great expectations group. She enjoyed dining with friends and especially happy hour. Above all, she was a devoted wife, mother, and Grandma. She leaves her family to cherish her memory including her 3 children, David Fera of New Orleans, LA; Shaun Fera of Henrico, VA and her husband James Beazley; and Julia Tracy of Harpers Ferry, WV and her husband Lloyd Tracy. She had five grandchildren: Margaret and Walter Beazley, as well as Lloyd, Emerson, and Corrigan Tracy. She is also survived by her sister, Anne Barbour Schwab or Portsmouth, Va and Robert Hendren Waldo Jr. of Lake Frederick and his wife Ruth Waldo. A Memorial Service will be held at St. James’ Episcopal Church in Leesburg on Wednesday, February 5, 2020 at 2:00 o’clock pm. Reception to follow in the Parish Hall at the church. The church requests that no flowers be sent. In lieu of flowers, the family suggests donations in Peggy’s name be sent to one of the following organizations: Rust Library, Loudoun Breast Health Network, or Loudoun Wildlife Conservancy. Please share condolences with the family www.Loudoun Funeral Chapel.com

The family of Margaret Waldo Fera created this Life Tributes page to make it easy to share your memories.

Send flowers to the Fera family.