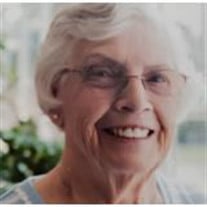 Alice Margaret Fritz, age 94, passed away peacefully on June 15, 2019 at Inova Loudoun Hospital surrounded by her family. She was born on May 11, 1925 to William George and Alice May (Williams) Pritchard in Pontllanfraith, Wales, the eldest of the “Pritchard girls”. Margaret was raised on Mynyddislwyn mountain in Wales, overlooking the Ebbw and Sirhowy Valleys, and attended school nearby to earn her secretarial qualifications. During WW2, she “worked with the Americans” and met an American GI, named Walter “Walt” Fritz, whom she married on July 16, 1945. As a war bride, “Margie” embarked on an adventure in America in 1946. She built a life in Bloomfield, NJ, for 42 years, where she worked with Walt running the family businesses, at Westinghouse and Peerless Tube Company and was a foster mother to many infants. After retirement in 1986, she moved to Leesburg, VA, to be closer to her family and started a new career with the Loudoun County Public Schools, where worked at Hamilton Elementary and Cool Spring Elementary in food services. She also volunteered at Harmony United Methodist Church, with the Loudoun County Animal Shelter, and her granddaughter’s Girl Scouts troops. She enjoyed attending programs at the Leesburg Senior Center. She will be greatly missed by her daughter, Jennifer Stuart, and son-in-law Larry of Leesburg, VA. Her grandchildren (Ryan Blackburn of Ashburn, VA; Aly and Kirk Kirkpatrick of Rogers, AR; and Kasey and Jacob Alexander of Hamilton, VA) and her great-grandchildren (Ian and Jane Kirkpatrick and Finn Alexander) will all miss their Mimi. She is preceded in death by her husband of 32 years, Walt Fritz, great-granddaughter, Hope Kirkpatrick, and sisters, Rosemary Scull and Holly John. The family will receive visitors on Friday, June 28, 2019, from 6pm to 8pm at the Loudoun Funeral Chapel, 158 Catoctin Circle SE, Leesburg, VA. Services will be held on Saturday, June 29, 2019, at 11:00am at Harmony United Methodist Church, 320 E. Colonial Highway, Hamilton, VA. Interment will be on July 1, 2019 at Restland Memorial Park in East Hanover, NJ, where she will be reunited with her beloved “Wally Baby.” In lieu of flowers, memorials can be made to Operation Smile, 3641 Faculty Boulevard Virginia Beach, VA 23453. Please share online condolences with the family at www.loudounfuneralchapel.com

Alice Margaret Fritz, age 94, passed away peacefully on June 15, 2019 at Inova Loudoun Hospital surrounded by her family. She was born on May 11, 1925 to William George and Alice May (Williams) Pritchard in Pontllanfraith, Wales, the eldest... View Obituary & Service Information

The family of Margaret Fritz created this Life Tributes page to make it easy to share your memories.