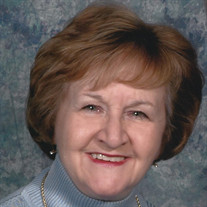 Margaret “Peggy” Devigne Reinhardt, 82 of Leesburg, Virginia passed away on Tuesday, June 16, 2020, at her home in Leesburg, Virginia. Born in Charleroi, PA she was the daughter of the late Harvey and Margaret (Moffit) Devigne. A resident of Northern Virginia since the mid-1960’s, Peggy and her husband resided in Arlington, VA, then Vienna, VA, where they lived for 40 years. They moved to Leesburg in 2014 to be with their daughter and family. Peggy is survived by her husband of 57 years, Harry B. Reinhardt, their daughter Amy Fagerli (Dan), son Bruce Reinhardt, grandsons Ross Fagerli and Owen Fagerli, sister Janet Westcoat and brother Henry Devigne. Two sisters, Patricia Anderson and Frances Amicucci, preceded her in death. Peggy was a long-time member of Wesley United Methodist Church in Vienna, VA, where she sang in the choir and was an active volunteer with the United Methodist Women, Peggy was a member of the Ladies Auxiliary of American Legion Post 180 in Vienna, VA, where she served terms as President and Chaplain. Retired from AT&T in Oakton, VA, Peggy was a volunteer with the Telephone Pioneers of America. During her retirement, she also enjoyed membership in a local Red Hat Ladies club. Peggy was a loving wife, mother, grandmother sister and aunt. She remained a faithful friend to many. After moving to Leesburg, she spent many happy hours at the Loudoun County Adult Day Care Center and enjoyed camaraderie with others, always making new friends. Her family is thankful to the wonderful caregivers who were part of her life since 2014 and who made it possible for Peggy to remain at home among family until her passing. A small family service will be held this summer in Pennsylvania. In lieu of flowers memorial donations may be made to the Alzheimer’s Association.

Margaret &#8220;Peggy&#8221; Devigne Reinhardt, 82 of Leesburg, Virginia passed away on Tuesday, June 16, 2020, at her home in Leesburg, Virginia. Born in Charleroi, PA she was the daughter of the late Harvey and Margaret (Moffit) Devigne.... View Obituary & Service Information

The family of Margaret "Peggy" D. Reinhardt created this Life Tributes page to make it easy to share your memories.

Send flowers to the Reinhardt family.