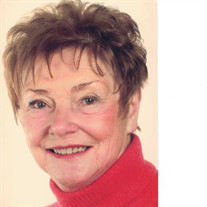 Leesburg, Virginia — Marguerite Jeanne Géraldine Joséphine Levaux Dudney, a resident of Leesburg, died at her daughter’s and son-in-law’s home on June 25, 2019. Born in 1924 in Visé, Belgium, Marguerite went to school at the Filles de la Croix in Chénée, and the Academy of Music in Liège, Belgium where she took courses in diction. Marguerite briefly joined her father to work in the local railroad station in Angleur, Belgium during World War II; a move that prevented her from deportation to work camps in Germany. It is through her work for the railroad that she met her husband, Charles Luther Dudney, who was a Lieutenant in the United States Army at the time. They were married in Angleur, Belgium on February 6, 1946. She followed her husband and supported him faithfully through his 30 years of military service and 24 moves until his retirement in 1976. She was a volunteer in the Welcome to Belgium organization in the early 1970’s, assisting wives of foreign dignitaries in adjusting to life in Belgium while introducing them to the sights and activities available. Marguerite loved good food, but particularly desserts; her favorite was Belgian rice pie. As a long-time member of her church choir in Ondenval, Belgium, she loved to sing (almost professionally) and performed solo for a televised mass in 1982. She loved haute couture fashion and belied her age. She maintained a French accent that charmed many anglosaxons who heard her speak. She is survived by her daughters Rosemary Michelle Lloyd, Anne-Marie Munos and husband Tony, her son Michael Charles Dudney and wife Martine, her brother Gérard Céleste Levaux and wife Edmée, her grand-children Justin Michael Lloyd, Lauren Elizabeth Dalton and husband Greg, Adam Christopher Lloyd and spouse Wes Willis, Erin Jessica Bruce and husband David, her great grandson – Grant Anderson Dalton, nieces and nephews, and step grandchildren, step great grandchildren, and step great great grandchildren. She was predeceased by her father Jean Henri Hubert Levaux and mother Anne Joséphine Willemsen, brother Guillaume Jean Levaux, husband Lt. Col. Charles Luther Dudney, and first-born son John Bernard Dudney. Donations in Marguerite’s memory may be made to: Maryknoll Fathers and Brothers, P.O. Box 302, Maryknoll, NY 10545-0302 or online at: https://maryknollsociety.org/how-support/more-ways-give/ . The Loudoun Funeral Chapel, Leesburg, VA, has been entrusted with arrangements. Funeral mass will be held at the church of Saint Donat in Ondenval, Belgium. Interment will be in the cemetery of Thirimont-Ondenval, in the Province of Waimes, Belgium. Please share online condolences with the family at www.loudounfuneralchapel.com

Leesburg, Virginia &#8212; Marguerite Jeanne Géraldine Joséphine Levaux Dudney, a resident of Leesburg, died at her daughter&#8217;s and son-in-law&#8217;s home on June 25, 2019. Born in 1924 in Visé, Belgium, Marguerite went to school at the... View Obituary & Service Information

The family of Marguerite Jeanne Dudney created this Life Tributes page to make it easy to share your memories.

Send flowers to the Dudney family.