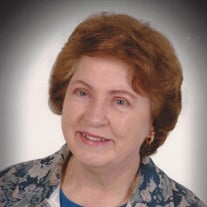 Marie LaVerne Powell Hicks passed away peacefully at Loudoun Nursing and Rehabilitation Center in Leesburg, Virginia on March 7, 2021 after a long illness. Born on May 13, 1936 in Asheville, North Carolina to Joseph and Evelyn Cogdill Powell, Marie began her 46-year marriage to James Hicks in 1962, moved to New York, and had two children. A hard worker, Marie got her first job at the age of sixteen. as a teenager at a Kress five and dime store in Asheville. In time Marie went on to work as a waitress; an administrator and chocolate tester at a candy company; book keeper at her husband’s auto parts store; owner of her own H&R Block tax preparation office; a hospital records clerk; an inventory manager as a civilian for the U.S. Air Force in Warner Robins, Georgia where she spent most of her career; and as a cashier at a home improvement store during her retirement in the Asheville area. Marie loved music and singing with family and friends. One of her proudest accomplishments was starting a Sweet Adeline barbershop chorus in Georgia. She also sang with a bluegrass group that visited her retirement home, Morningside House of Leesburg. Over the years, Marie took the opportunity to attend college classes in logic, algebra, economics, and American literature. She was particularly proud of a term paper she wrote on Ernest Hemingway, which she would offer to let family members read. Marie will be remembered for her kindness. She was a devoted caregiver to her husband and parents when they needed her, and had a history of acts of kindness and charity, often done in secret. Although Marie was a humble person, she had an excellent sense of humor and sometimes presented humorous speeches or poems on special occasions. She will be sorely missed by her two children, Barbara Hicks, James Hicks and daughter-in-law Erin Hicks, and by granddaughter Mary Hannah. She is also survived by her siblings Joseph Powell and Barbara and Bryant Rogers, brother- and sister-in-law Alan and Vicki Hicks, Penny Hicks, her aunt Patsy Ford, and many nieces and nephews. There will be no funeral service at this time, but Marie’s ashes will be scattered on the Blue Ridge Parkway later this year. Please share online condolences with the family at www.loudounfuneralchapel.com

Marie LaVerne Powell Hicks passed away peacefully at Loudoun Nursing and Rehabilitation Center in Leesburg, Virginia on March 7, 2021 after a long illness. Born on May 13, 1936 in Asheville, North Carolina to Joseph and Evelyn Cogdill Powell,... View Obituary & Service Information

The family of Marie LaVerne Hicks created this Life Tributes page to make it easy to share your memories.

Send flowers to the Hicks family.