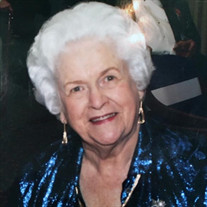 Doris O’Neill passed peacefully at Falcons Landing Retirement Community on Sunday, September 1st 2019 of natural causes. She was surrounded with loving family, friends, music, and prayer. The daughter of Israel Robarge and Irene Ducharme, Doris was born in Lowell and grew up in Dracut, Massachusetts. She was preceded on her journey to Heaven by her beloved husband, Col. Timothy F. O’Neill, USAF Retired, to whom she was married for 67 years. She was often heard to say “Isn’t it amazing that a farm girl like me was blessed to live this glorious life!” She is survived by two loving sisters, Theresa and Simone; her 8 children, Brian, Barry, Michael, Steven, Timothy Jr., Cathy, Donna and Diane; 17 grandchildren and 6 great-grandchildren – all of whom were truly blessed to experience what it meant to be loved unconditionally. Doris was especially proud of her French Canadian heritage. English was her second language as a child but she continued to speak French, and later Spanish, fluently throughout her life. When she wasn’t working on her family farm, she was excelling in school and was the first member of her family to graduate high school, in fact, winning the title of New England Spelling Bee Champion. She was also an excellent athlete who was nicknamed the “Queen of Swat” for her prowess on the baseball diamond. Doris worked in the textile mills of Lowell, Massachusetts during WWII as a “mill girl.” She married in 1947 and during her time as the wife and partner of an Air Force pilot and officer, she expertly navigated her way with eight children in tow, through 50 moves, while being stationed in California, Alabama, Texas, Michigan, Florida, Connecticut, France, Germany, Panama and finally settled in New Hampshire and Virginia. She retired from Raleigh’s in Fair Oaks, Virginia as a fine clothing salesperson where she took great pride in her work and later enjoyed spoiling her children and grandchildren with the pension she earned each month. Singing was a way of life for Doris until her very last days. Her beloved mother told her that if you learn a song before breakfast, you would remember it the rest of your life. She remembered every lyric to thousands of songs and she and Tim led the O’Neill family St. Patrick’s Day sing-along for 50 years, which always culminated with her beautiful rendition of Danny Boy. Doris and her sisters sang together throughout Massachusetts in their younger years and she was President of the ladies Skylark singing group presenting English and Spanish language concerts in Panama, Central and South America and President of the Albrook/Howard Officers’ Wives Club. She continued to sing at Falcons Landing as a soloist and cantor at mass and memorial services. She passed on her love of singing to her children and she is undoubtedly teaching the choir in heaven a few tunes. Doris’ hobbies include sewing, needlework and cooking. She was active in Sew Much Comfort at Falcons Landing making special garments for Wounded Warriors with prosthetic devices. She will be missed by all whose lives she touched with her great kindness, generous spirit and love. We have lost a beautiful mother, sister, nana, great-grandmother, aunt, and friend but Heaven has surely gained an Angel. For those who would like to pay their respects, Visitation will be from 6-8pm on October 29th, 2019 at Loudoun Funeral Chapel, 158 Catoctin Circle, S.E., Leesburg, Virginia 20175 Doris's Memorial Mass will be held at 10:30am on October 30th, 2019 at the Falcons Landing Chapel followed immediately by a Luncheon Reception in the Ballroom. 20522 Falcons Landing Circle, Potomac Falls, Virginia 20165 The Committal Ceremony and Interment at Arlington National Cemetery will take place at 3pm on October 30th. Guests attending must arrive at the Administrative Building not later than 2:15pm to proceed to the graveside service. For those coming from out of town, a room block has been set up under "Doris O'Neill Services" at the Hampton Inn Dulles/Cascades with a rate of $99/night for guests between October 27th-31st. Please call 703-450-9595 or follow this link to make your reservation: https://hamptoninn.hilton.com/en/hp/groups/personalized/W/WASSLHX-ONS-20191027/index.jhtml?WT.mc_id=POG We look forward to joining together in celebration of Doris's incredible life. Donations can be made on her behalf to The Fisher House or Wounded Warrior Project.

The family of Marie Doris O'Neill created this Life Tributes page to make it easy to share your memories.

Send flowers to the O'Neill family.