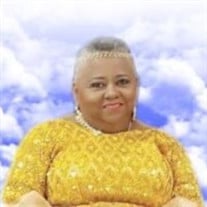 Martha Estelle Hall was blessed to see her 79th birthday just a few short weeks ago. She was born June 10, 1942 to the union of the late Harvey Edgar Daye, Sr. and Ida Virginia Daye Fletcher. She was preceded in death by her brothers Harvey Daye, Jr. (Bubby), William Daye (Rags), John Daye (Johnny), James Daye (Jice), Charles Daye (Jake), and her sister Shirley Fletcher (Sissy). Born, reared, and educated in Leesburg, VA as well as in the city of Washington, D.C., she began her family at the age of 21. Martha was brought up in the church and would subsequently, be baptized at Providence Baptist in Leesburg, VA. During her time as a member of Providence, she was very active teaching Sunday school, singing in the choir, working in the Food Service Ministry, and serving as a Deaconess. Martha and her husband (of fifty-four years), Elwood (Ted) Hall, by their examples, taught their children to put God first in everything they do as well as stressed the importance of education and hard work. She modeled these very instructions by returning to school to complete her G.E.D in 1985; Martha would continue her education with specialized classes in catering and the culinary arts. While rearing her family, supporting her community, and serving the traditions of a ‘village’ mom, her daily life would move tirelessly from role to role: as a life coach, a family counselor, a tutor, a cheerleading coach, an avid youth sports supporter, a skilled bowling teammate, the number one supporter of her children and grandchildren’s activities, a die-hard Redskin (AKA Washington Football Team) fan, an antique and art collector, and a consummate gardener. Martha was an excellent chef; she excelled as the head Pastry Chef for the Historic Laurel Brigade Inn in Leesburg, VA for thirty-five years. One of her most famous patrons to visit the Laurel Brigade was Lillian Carter, the mother of former President Jimmy Carter. During that time, she also ran her own bakery business and specialized in one-of-a-kind cakes for every occasion as well as specialty desserts and beautiful wedding cakes. Best known by locals for her delicious breads and her incredible apple pies, she retired from the Laurel Brigade and later took various positions to include a position as the Cafeteria Manager of Lucketts Elementary School. Once again, she found a place where she could enjoy her love of cooking and baking, but more importantly, she continued to help shape the lives of young people. That was her true passion. Martha met the love of her life, Ted Hall of Middleburg, VA in 1965. They dated for two years before she finally gave into his considerable charms. They were married in 1967 in a private ceremony at the home of his eldest brother Harold Hall. They would renew their vows at Providence Baptist Church twenty-five years later with their children as witnesses. Together they built a life and homes that welcomed, reared, and for many became a temporary refuge. Learning from all of those who loved and supported her as a young woman and as a mother, Martha recognized and appreciated the importance of family and friends very early in her life. Hers would be a legacy of encouraging friends and loved ones to look for the beauty and purpose in everything. It mattered not that it was a piece of antique furniture in disrepair, a discarded pet, a dying plant, a damaged piece of art, or a heart-broken co-worker. She never failed to lift up, to celebrate, to identify with, and to love on the ‘broken things’. Martha is survived by her husband Elwood (Ted) Hall. Her children: Robert Hall of Richmond, VA,; Anchella Tanner (Derrick) of Triangle, VA; Christopher Hall (Rebecca) of Raleigh, NC; and Chandler Daye of Leesburg, VA. Besides her children, Martha leaves to cherish her memory, four sisters, Isabelle Wood, Edith Hughes (Noah), Mary Allen, and Dorothy Daye. Ten grandchildren, Brittani Hall, Jerrica Welch, Amanda Welch, Corey Tanner, Derrick Tanner, Jr. (Erryn), Jordan Grooms, Jayla Grooms, Keyan Johnson, Isiah Palovitz, and Cayden Daye. Three great-grandchildren, Mya Hudson, Croix Tanner and Clark Tanner. Three children adopted-in-love Teresa Little, Steve Summa, and Benjamin Scott, and one adopted-in-love granddaughter, Grace Burmingham, a host of nieces, nephews, cousins and friends.

Martha Estelle Hall was blessed to see her 79th birthday just a few short weeks ago. She was born June 10, 1942 to the union of the late Harvey Edgar Daye, Sr. and Ida Virginia Daye Fletcher. She was preceded in death by her brothers Harvey... View Obituary & Service Information

The family of Martha E. Hall created this Life Tributes page to make it easy to share your memories.

Send flowers to the Hall family.