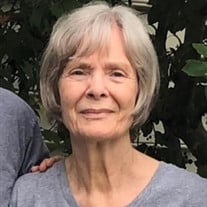 Mary Ola Wright Brown passed away Tuesday, June 15, 2021, at her home in Williamsburg, Virginia with her family by her side. She fought a courageous battle against cancer with tremendous courage, determination, and the will to live. Her disease never claimed her spirit. Mary was born in Greenville, Alabama on May 11, 1941, to parents Russell and Rosalie Wright, and grew up in Montgomery, Alabama. She is survived by her husband, William W. Brown. They met while students at Auburn University and were married 59 years. Also surviving are her three daughters, Mary Kathryn Brown, M.D. and grandson Gavin Sellors of Santa Rosa, CA; Sharon Lynn Brown of Ashburn, VA; Laura Carolyn Brown and granddaughter Ana Lina Cordova-Brown of Charlottesville, VA; brother, George H. Wright and sister-in-law Donna T. Wright, of Mount Juliet, TN. Her proudest achievement was raising three girls to become strong independent women. She was an intelligent, patient and fun mother. She gave her children so much love and confidence, always putting the well-being of her daughters before anything else. As a grandmother, her love shone in all the ways she found to nurture and brighten her grandchildren’s lives. Mary and her family lived for 40 years in Blacksburg, Virginia where her husband was a professor at Virginia Tech. Mary earned a Bachelor of Science in Education at Auburn University. She worked in several capacities for Virginia Tech in the Departments of Engineering and Continuing Education. As an avid reader, she became known to much of the town during her time as a librarian for the Town of Blacksburg. In addition to her knowledge of books, she cared about her library patron’s lives and wanted to know all about their health, children’s development, and life experiences. She was also gifted with an extraordinary memory and remembered her family history in the same caring way. She could recall details of growing up with her extended family in Alabama many years ago. As a great storyteller, she enjoyed relating family memories many years later. She was truly a “people” person. Our family has lost its reference librarian. She was deeply spiritual, had a continuous positive light about her and believed in the goodness of people. She had an ability to connect with others and never met a stranger. Speaking to people she met in the grocery store, recreation center, or on daily walks, she always took the time to stop, talk, and ask about their well-being. She loved animals, being in nature and walking. She was still determined to walk in the neighborhood with her walker until a few days before passing away. After a life which touched so many people with the light of her spirit, Mary was laid to rest Friday, June 18, 2021, at a private family service in Leesburg, Virginia, with arrangements made by Loudoun Funeral Chapel. A memorial page for Mary with video and photos may be found on their website: https://www.loudounfuneralchapel.com/obituaries/Mary-Brown-268/

Mary Ola Wright Brown passed away Tuesday, June 15, 2021, at her home in Williamsburg, Virginia with her family by her side. She fought a courageous battle against cancer with tremendous courage, determination, and the will to live. Her disease... View Obituary & Service Information

The family of Mary Wright Brown created this Life Tributes page to make it easy to share your memories.