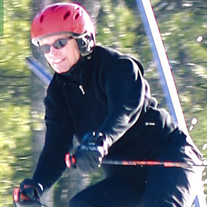 Mary Elizabeth Glovier, a resident of Potomac Falls, Virginia, and formerly of McLean, VA, passed away on April 25th, 2018 at the age of 85. Mary Lib was born in Morristown, NJ and raised in Cranford, NJ. She was a graduate of Cranford High School and her beloved Duke University. She married Harold Alba Glovier (Hal) in 1954 in a service at the United States Naval Academy and together they traveled the world as he served with distinction as a Naval officer in the submarine service, living on the islands of Guam and Hawaii, as well as New London, CT and Charleston, SC before settling in McLean. Once settled in Virginia, Mary Lib had a successful career in education, working as a Spanish teacher, counselor, and ultimately the Senior Assistant Principal at JEB Stuart High School in Falls Church, part of the Fairfax County Public School System. Mary Lib was passionate about travel, sports, home décor, roast lamb, hot-cross buns and pouilly fuissé. She adored the New Yorker magazine, maintaining her subscription even when it arrived a month later in the South Pacific. Mary Lib and Hal retired to bucolic Waterford, VA in the 2000s, enjoying the view from their post-and-beam barn across hay fields and pond to the foothills of the Shenandoah. They also traveled abroad on back country bike trips and wine country jaunts. An avid life-long skier, Mary Lib after her retirement became a ski instructor at Bryce Mountain, teaching young children the joys of the slopes. She continued to ski well into her 70s, and was proud of her ability to gold medal in NASTAR and other senior racing events for her age group. A passionate lover of books, she was the member of the same book club for many years. Mary Lib was also a devoted long time member of Immanuel Presbyterian Church in McLean. Mary Lib was predeceased by her parents J. Walter Coffee and Margaret Ahearn Coffee, her husband, Captain Harold A. Glovier Jr., and sister, Ellen Coffee Mair. She is survived by her brother, James Coffee, two daughters, Meg Glovier and Kathryn Moore, a son, Curtis A. Glovier and four grandchildren: Benjamin Grubb, and Margaux, Grace and Clay Glovier. A memorial service will be held at 11 a.m. on Saturday, May 26th at Immanuel Presbyterian Church 1125 Saville Lane McLean, VA 22101. Please send gifts to the Immanuel Presbyterian Church’s “Changing Lives”.

Mary Elizabeth Glovier, a resident of Potomac Falls, Virginia, and formerly of McLean, VA, passed away on April 25th, 2018 at the age of 85. Mary Lib was born in Morristown, NJ and raised in Cranford, NJ. She was a graduate of Cranford High... View Obituary & Service Information

The family of Mary Elizabeth Glovier created this Life Tributes page to make it easy to share your memories.

Send flowers to the Glovier family.