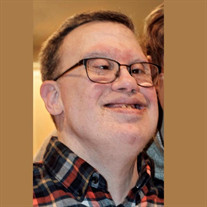 Matthew John Rosenthal, ladies' man, foodie, snazzy dresser, and accomplished sportsman, died on April 7, 2021 at the age of 54 from complications of Alzheimer’s disease. Matt’s light was a special one, warming the hearts of all those that were fortunate enough to know him. A graduate (with honors) of the James E. Allen Jr./Sr. High School for disabled students, Matt competed in numerous Special Olympics in the discipline of Floor Hockey, bringing home the NY State championship on several occasions. He went on to work at AHRC Suffolk for over 30 years, a distinction he was particularly proud of, and in the mailroom for the last 10. He enjoyed tremendously delivering mail at the facility, which he took as an opportunity to bring joy and light to all he came in contact with. Matt had a love of meatloaf and John Denver the likes of which are usually reserved for God and Country and possibly only superseded by his love of WWE, the Islanders, and the Mets. The sweet strains of his particular rendition of “Country Roads, Take Me Home” often reverberated through the home in New York that he shared with father Albert and mother Sheila, both of whom predeceased Matthew. Always a social butterfly, Matt was the first to greet guests at any family event, be it a wedding, christening, or funeral and has likely already taken up his new role as greeter at the Pearly Gates. He is survived by sister Elizabeth (Paul), brothers Peter (Susan) and Thomas (Anne), and numerous nephews, nieces, and cousins who will miss him terribly. Visitation will be April 13th from 6-8PM at Loudoun Funeral Chapel and the funeral mass to be said April 14th at 10:30AM from St. Theresa Catholic Church in Ashburn. The family asks that donations be made to the Special Olympics in lieu of flowers.

Matthew John Rosenthal, ladies' man, foodie, snazzy dresser, and accomplished sportsman, died on April 7, 2021 at the age of 54 from complications of Alzheimer&#8217;s disease. Matt&#8217;s light was a special one, warming the hearts of all... View Obituary & Service Information

The family of Matthew John Rosenthal created this Life Tributes page to make it easy to share your memories.

Send flowers to the Rosenthal family.