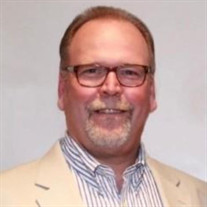 Michael Anthony Barr, 62, passed away on Sunday, September 13, 2020, at his home in Purcellville, Virginia. Michael was very outgoing with an infectious personality, making friends wherever he went. He had a generous spirit and a passion for mentoring that touched many people. Michael served ten years on the Board of Trustees for PHILLIPS Programs for Children and Families. He and Robin were married in 1981. Their children, Sean and Jessica, were Michael’s pride and joy. He was ecstatic when his grandson Maxwell Michael was born, and he became “Boppa.” Michael looked forward to large holiday family gatherings and loved the family vacation at Rehoboth Beach, an annual event that had been the highlight of his summers for well over 50 years. Michael was an avid sports fan, loyally supporting the Boston Red Sox and Washington Redskins. He liked to golf, play blackjack, cook on the grill, and cut the grass with his zero turn mower. Michael attended Mount Vernon High School in Alexandria, Virginia, and graduated with a Bachelor of Science degree in Business Management from Radford College in 1979. He started his professional career in information technology with Riggs National Bank in Washington, D.C., followed by Evans Financial Corporation. In 1984, Michael settled in at Freddie Mac for 26 years, where he was highly influential in the technology and infrastructure buildout of the secondary mortgage market. He next worked at Pragmatic Solutions, and then spent his last seven years with ALTA IT Services in Rockville, Maryland. He is survived by his wife, Robin; son, Sean (wife Jenny); daughter Jessica; grandson Maxwell; stepfather Frank Harrison (wife Yolanda); brother Bob Barr (wife Annette); and sisters Cindi Jones (husband T.C.), Gayle Clary, Tracey Halman (husband Chuck), and Amy Harrison (husband Michael Beaulieu). He is also survived by ten nieces and nephews and their children, and a host of more relatives and friends. He was preceded in death by his mother R. Elaine Harrison and father Robert Barr. A memorial service was held at his home on September 26, 2020. To honor Michael’s legacy of mentoring others, donations may be made to PHILLIPS Programs at www.phillipsprograms.org or mail to 7010 Braddock Road, Annandale, VA 22003.

Michael Anthony Barr, 62, passed away on Sunday, September 13, 2020, at his home in Purcellville, Virginia. Michael was very outgoing with an infectious personality, making friends wherever he went. He had a generous spirit and a passion for... View Obituary & Service Information

The family of Michael A. Barr created this Life Tributes page to make it easy to share your memories.

Send flowers to the Barr family.