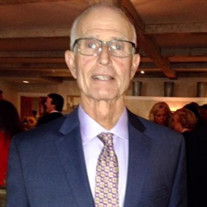 Michael J. Casey, 72 of Leesburg, VA, departed this life on November 13, 2020, after a six-year battle with liver cancer with his family by his side. Michael was born on November 28, 1947, to the late John J. and Nadine Strait Mahaffey Casey in Washington, DC. His was preceded in death by his brother Marc Mahaffey and his adoptive parents, John and Leona Stevens. Michael was a life-long resident of Northern Virginia. After graduating from Jeb Stuart High School, he enlisted in the USMC and proudly served his country in Vietnam and Cuba. Prior to retirement, he was employed by Nova Group in various positions throughout his career. Upon retirement, he assisted in caring for his father-in-law and working part-time for AutoNation in Leesburg. Michael participated in numerous drug trials at Georgetown University Hospital hoping that if they didn’t provide a cure for him, they would be of benefit to others. Michael was an avid reader of Civil War and Vietnam history. His hobbies included metal detecting, being at the beach, body surfing, and walking with his wife and dogs. He was a life-long Redskins fan. He will be remembered by those who knew him for his willingness to listen without judgment, putting the needs of others before his own, and selfless devotion to his family. Michael is survived by his wife, Kathleen Sullivan, of Leesburg; daughter Emily Hernandez and grandson Dylan Usher of Monument, CO; son Adam Hernandez (Anna Badyoczek) and granddaughter Karolina Hernandez of Alexandria, VA. He is also survived by his brother Richard (Rebecca) Casey of Rockville, MD; niece Kimberly Casey of Washington, DC; nephew Timothy Casey of Rehoboth Beach, DE; niece Holly Cuddington of Haymarket, VA; brother-in-law Mark Sullivan of Athol, NY; brother-in-law John (Kathleen) Sullivan of Leesburg; and nephews Ian and Mark Sullivan of Leesburg. Thank you to the nursing staff at Adler Center for their loving care during the last weeks of his life. In lieu of flowers, consider donations in his memory to one of his favorite charities – the Disabled American Veterans, St. Jude or the Humane Society.

Michael J. Casey, 72 of Leesburg, VA, departed this life on November 13, 2020, after a six-year battle with liver cancer with his family by his side. Michael was born on November 28, 1947, to the late John J. and Nadine Strait Mahaffey Casey... View Obituary & Service Information

The family of Michael J. Casey created this Life Tributes page to make it easy to share your memories.

Send flowers to the Casey family.